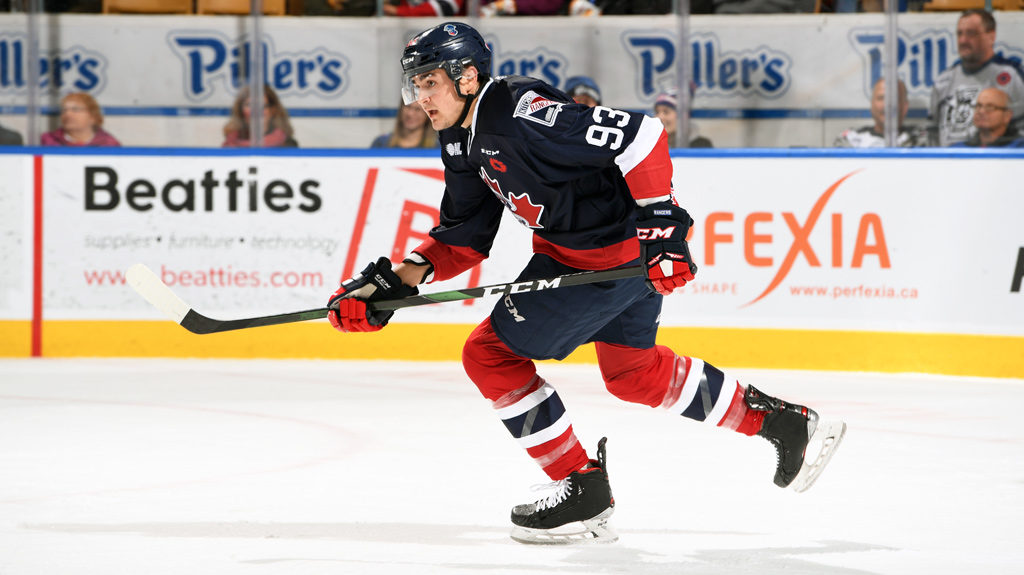 Jonathan Yantsis scored two goals to bring his season goal total to 9. Reid Valade also tallied a goal, his sixth of the year. But four unanswered goals between the first and second period for the Storm gave the visitors the lead, and eventual win, 6-3.

Lucas Pfeil made 36 saves in the loss.

Goalscoring didn’t occur until late in the first period when an attempt on net by Donovan Sebrango rebounded off the pads of Nico Daws right to Jonathan Yantsis (8) who made good on the chance to give the Rangers the lead, 1-0 at 17:44.

Michael Vukojevic picked up the second assist on the opening goal.

The Rangers began the period on the powerplay and with 30-seconds left in the man-advantage, Yantsis took a hooking penalty.

Guelph kept the pressure up after going up two goals and with Pfeil slightly out of position after a save, Hillis passed out front to Chayka (5) who netted his second of the night to make it 4-1 at 9:50.

At 17:38, while on the powerplay, the Rangers cut their deficit in half when a shot from just outside the faceoff circle by Riley Damiani rebounded off Daws and right to Yantsis (9) who scored his second of the night from in-close to make it 2-1.

Liam Hawel also picked up an assist on the goal.

Just 25-seconds later, Josh Wainman (1) airmailed a puck down the ice towards the Rangers empty net and his effort earned him his first goal of the season to make it 5-3.

The game would end with shots favouring the Storm, 42-37.