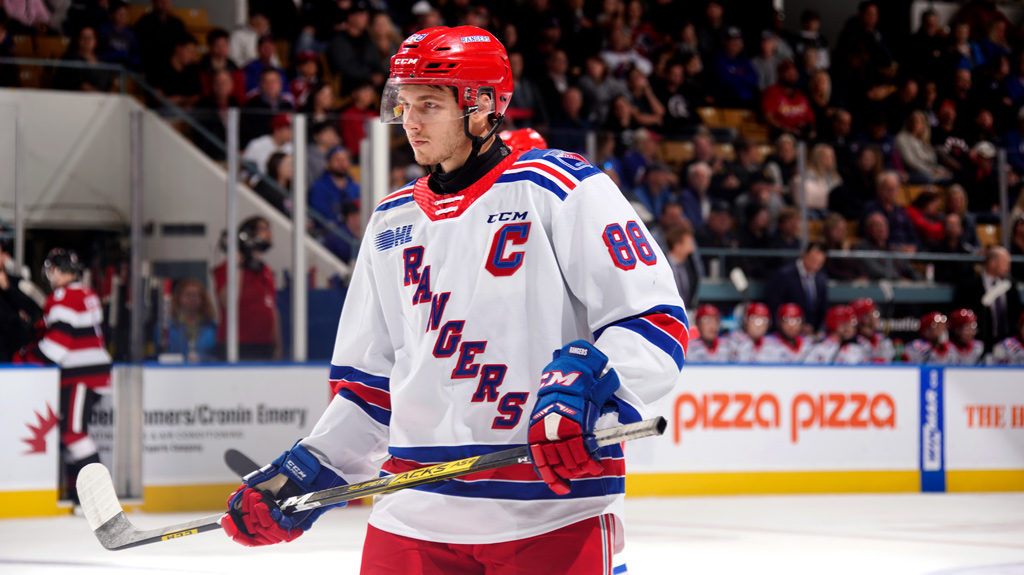 Despite going down 3-1 midway through the first period, the Rangers scored three unanswered goals to defeat the 67’s 4-3.

Kitchener opened up the scoring at 6:00 of the first period. The puck was shot off the end boards by Isaac Langdon, picked up by Ryan Stepien, who passed it in front of the net to Mike Petizian (1). The left-winger fired it past a sprawling Will Cranley to make it 1-0.

At 6:32, Jonathan Yantsis got called for interference and, on the power-play, Austen Keating jumped on a rebound from a Jack Quinn shot to score his second of the year and tie it up, 1-1.

The 67’s took the lead at 12:32 when Quinn, breaking into the Rangers defensive zone, put on the breaks, stepped around the defender and went high, blocker-side on Ingham to make it 2-1.

At 14:00, the 67’s extended their lead when a Noel Hoefenmayer shot rebounded off the pad of Ingham and onto the stick of Hoelscher who didn’t miss the chance to bury his fourth of the season and it was 3-1.

Quinn took an interference penalty at 15:39 and on the ensuing power-play, Francesco Pinelli scored his team-leading sixth goal of the season on a bullet of a shot to pull the Rangers within one, 3-2.

Noel Hoefenmayer took a slashing penalty at 1:52 of the second period to give the Rangers their second power-play of the game.

On the man-advantage, Greg Meireles passed it cross-ice to Riley Damiani who passed it down low to Jonathan Yantsis (5) at the side of Cranley’s crease. Number 93 deflected it in the net to tie the game up, 3-3.

Kitchener retook the lead at 14:01 when Donovan Sebrango picked up a loose puck and fired it past Will Cranley to get his first goal of the season and make it 4-3.

Liam Hawel and Damiani earned assists on the goal.

Ottawa heavily out-shot the Rangers in the final period, 18-7, but Ingham kept the puck out of the net for the final 20 minutes and the Rangers held onto the win, 4-3.

The Rangers next game is on the road on Wednesday October 9th at 7pm versus the Owen Sound Attack. The Rangers return home on Friday October 11th to play the Windsor Spitfires.