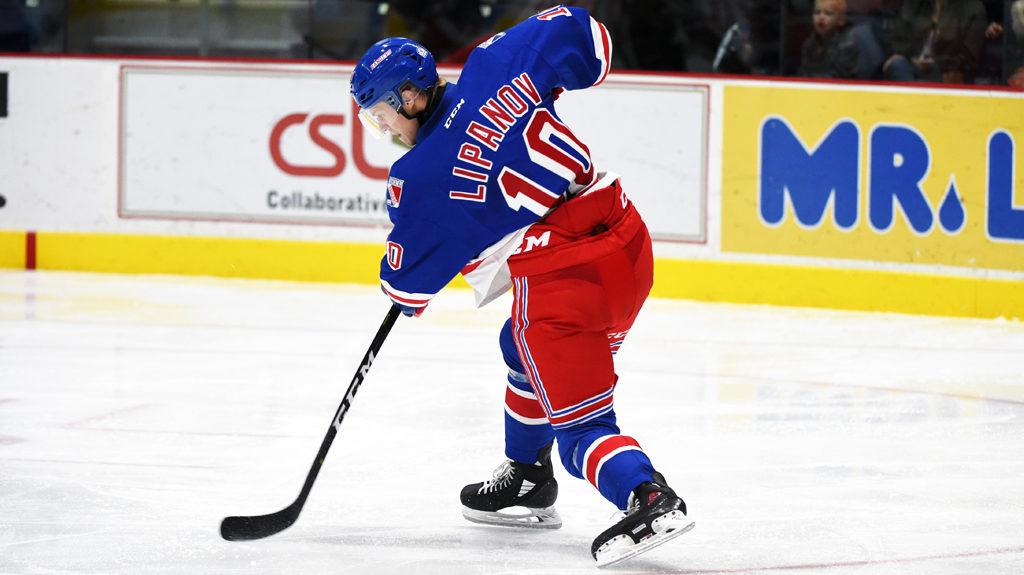 Alexey Lipanov had three assists and won first-star honours, while Joseph Garreffa, the third star, had one goal and one assist.

Reid Valade netted his first-ever OHL goal in the third period on assists from the aforementioned Lipanov and Garreffa.

Luke Richardson stopped 27 of 30 shots on the night to pick up the win.

Owen Sound’s Daylon Groulx took a blindsiding penalty just 2:17 into the opening frame and on the ensuing powerplay, the OHL’s third-best powerplay capitalized at 3:32. Riley Damiani and Alexey Lipanov picked up assists on Greg Meireles’ 16th goal of the season to give Kitchener the early lead, 1-0.

Mike Petizian and Reid Valade took minor penalties in the first period but neither resulted in a goal by the Attack.

At 5:53 of the second period, Owen Sound found an equalizer. Nick Suzuki, from behind Richardson’s net, skated to the side of the net and managed to flip the puck up, over, and behind the Rangers netminder to make it 1-1.

Shortly after the game-tying goal, Eric Guest intercepted a puck at the Rangers blueline and found himself on a breakaway. Guest was able to get two shots off but couldn’t find the back of the net.

Immediately after the breakaway, the Attack broke into their offensive zone. Cade Robinson’s shot went off Richardson and the rebound was picked up by Brady Lyle who made good on the opportunity for his sixth goal of the season and just like that, it was 2-1 Owen Sound.

At 13:24, the Rangers would respond on Joseph Garreffa’s 12th goal of the season, assisted by Lipanov and Reid Valade, to tie it up 2-2.

The period would end with the game tied in shots 24-24.

Kitchener reestablished their lead at 3:10 of the third period when Reid Valade netted his first OHL goal on assists by Valade, his third of the night, and Garreffa. 3-2.

The lead was shortlived, however, as Aidan Dudas went top shelf on Richardson for his 14th to make it 3-3 at 5:34.

It was a pass from Damiani to Nick McHugh that led to number 21 splitting a pair of Attack defensemen and burying his 9th goal of the season to once again give the Rangers the lead, 4-3.

With just 1.3 seconds left in the game, Owen Sound netted the puck, which momentarily gave the Attack the game-tying goal. However, the referees reviewed the goal and found that the Attack player batted the puck in with his hand, nullifying the goal.

The win saw Kitchener outshoot their division rival 32-30 for their fourth win in a row.

The Rangers next home game is on Friday, January 11 at 7:30 pm versus the Guelph Storm. The next road game for Kitchener is on Saturday, January 5 at 7:05 pm versus Saginaw.

1:17
jesse fishman rangers vision
RANGERS VISION: This or That - Jesse Fishman
11 hours ago