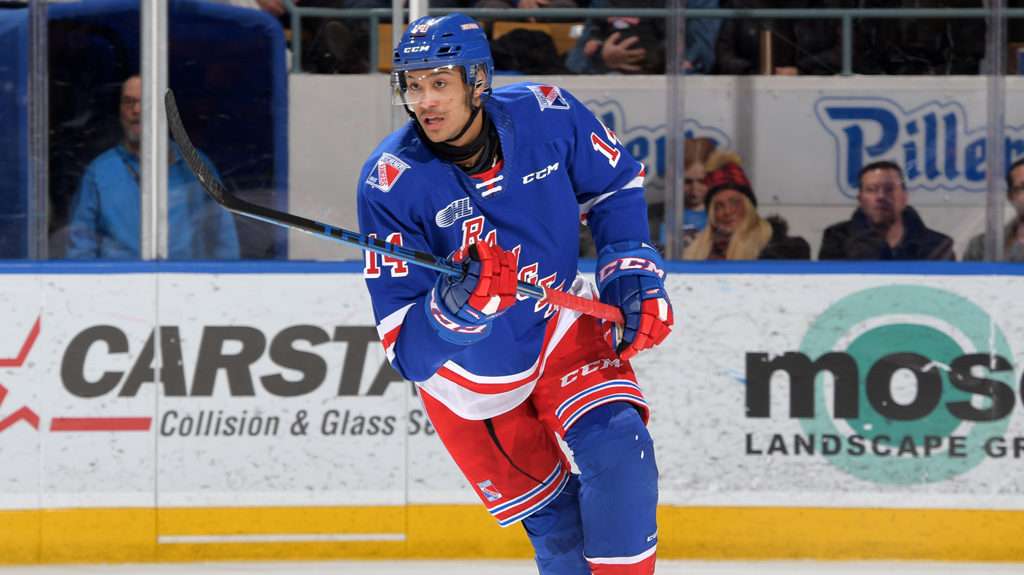 Lucas Pfeil made 27 saves in the loss.

The Blueshirts opened up the scoring on Friday night while on the power-play. Francesco Pinelli passed the puck to Serron Noel behind the net who found Declan McDonnell (20) in front. The right-winger fired a shot past Jet Greaves to make it 1-0 at 5:00.

With 1:11 left in the first period, the Colts got the equalizer. Tyson Foerster broke into the Rangers defensive zone and passed into the centre of the ice to a streaking Evan Vierling (14) who beat his defenseman and went over the blocker-side shoulder of Lucas Pfeil to tie it up 1-1.

Shots after the first period were 10-7 in favour of the Rangers.

The Colts scored at 1:05 of the second period when a defensive zone turnover led to a long pass to mid-ice for Aiden Brown (20) who got himself on a breakaway and scored five-hole to make it 2-1.

Minutes later, at 2:34, the Colts extended their lead when a shot from distance by couldn’t be corralled by Pfeil and Ethan Cardwell (22) tapped in the loose puck from the side of the crease and it was 3-1.

The Rangers got one back at 4:41 when Pinelli passed to Mike Petizian (21) who fired a shot on net from the slot that was blocked before he collected his own rebound and made good on the second chance to make it 3-2.

Donovan Sebrango also earned an assist on the goal.

Barrie regained the lead at 18:59 when a shot from the face-off dot by Anthony Tabak (11) beat Pfeil glove-side and it was 4-3.

Liam Hawel took a tripping penalty at 9:18 and, on the ensuing power-play, at 9:31, Nathan Allensen made a backhand pass cross-ice to Tyson Foerster (35) who clapped a one-timer past Pfeil to extend the Colts lead to two, 5-3.

At 16:57, the Rangers evened it up during some four-on-four play. A shot on net by Bergkvist was tipped in by Jonathan Yantsis (38) and that made it 5-4.

Riley Damiani also earned an assist on the goal.

The next Rangers home game is Friday March 13th at 7:30 pm versus the Sault Ste. Marie Greyhounds.