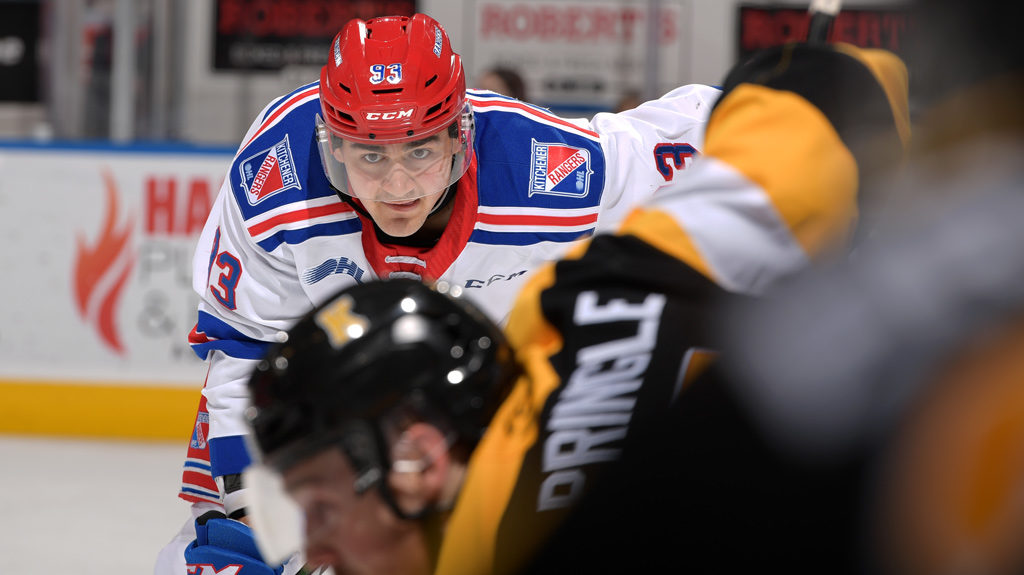 The Rangers led 2-0 midway through the second period on goals from Jonathan Yantsis and Greg Meireles but three unanswered goals by Kingston put them up until late in the third period. With just 15-seconds remaining, Yantsis scored his second of the game off a deflection to send the game to overtime.

Overtime didn’t solve anything; however, the Rangers won the shootout on the fourth shooter.

Pfeil stopped 20 in the win.

Kitchener got on the board first late in the opening period. At 17:45, a Frontenacs turnover in their own zone led to Liam Hawel making a backhand pass across the front of the net to Jonathan Yantsis (10) who had an easy tap-in to make it 1-0.

Arber Xhekaj also picked up an assist on the opening goal.

That would be the extent of the scoring in the opening 20 minutes. The Rangers led in shots 11-7.

On the Rangers fourth powerplay of the second period, they finally capitalized. Axel Bergkvist passed to Riley Damiani in the faceoff circle and Damiani immediately passed the puck cross-ice to Greg Meireles (3) who rifled home a shot to make it 2-0 at 14:59.

Kingston cut their deficit in half at 18:17 when Jordan Frasca passed from down low out to Dawson Baker who put the puck through Lucas Pfeil’s five-hole to make it 2-1.

The second period would end with the Rangers remaining ahead in shots, 24-15.

It was the visitors who broke the deadlock at 9:46 when Lucas Rowe went low behind the net and quickly dished it out to Dustin Hutton who squeezed a shot past Pfeil to make it 3-2.

With just 15-seconds left in the third period and an extra attacker on the ice, a shot on net by Bergkvist was deflected by Yantsis (11) who netted his second of the night to make it 3-3 and send the game to overtime.

The third frame would end with the Rangers leading in shots 34-20.

Overtime didn’t solve anything despite a quality two-on-none opportunity for the Rangers.

In the shootout, the fourth shooter, Reid Valade, won it for the Blueshirts.