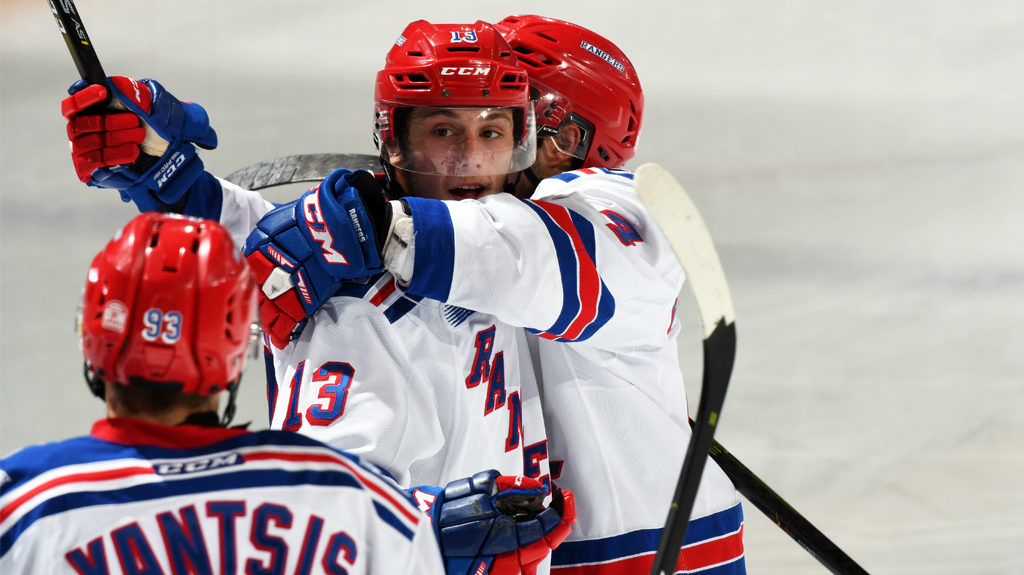 Sault Ste. Marie, ON.: The Greyhounds (31-11-4-1) were riding a seven-game win streak into their matchup with the Rangers (21-22-3-0), but an overtime goal by Jonathan Yantsis sealed the win for Kitchener in a playoff-like game at the GFL Memorial Gardens.

Rickard Hugg had three assists on the afternoon and Mike Petizian earned himself second-star honours with a goal. Lucas Pfeil saved 22 in the win.

The Greyhounds were the first team to get on the scoreboard on Sunday afternoon. At 3:04 of the first period, Ryan O’ROurke made a cross-ice pass to Rory Kerins who scored his sixth goal of the season on Sault Ste Marie’s first shot on Lucas Pfeil to make it 1-0 for the home team.

To successive penalties were taken by the Greyhounds at 5:01. Mac Hollowell was booked for a trip and Zack Trott for a hook. The penalties put the Rangers on a five-on-three for a full two minutes.

On the ensuing powerplay, Joseph Garreffa, on a connection from Jonathan Yantsis and Rickard Hugg, was able to beat Matthew Villalta for his 14th goal of the season to tie it up, 1-1.

At 8:01 of the first, Michael Vukojevic, from behind Villalta’s net, dished the puck to Mike Petizian who buried a backhand over the shoulder of the Greyhounds netminder to give the Rangers the lead, 2-1.

The period would end with the Rangers up in shots 15-3.

Sault Ste. Marie evened the game up again thanks to O’Rourke who, on a pass from Morgan Frost, shot the puck, had it deflect off Donovan Sebrango, and on the second opportunity, O’Rourke beat Pfeil to make it 2-2.

As the period was coming to an end, Yantsis took an unsportsmanlike penalty with one minute left. On the powerplay, Barrett Hayton saw Hollowell calling for it at the top of the ice and number 11 wired it past Pfeil for his 16th of the season to give the Sault the lead, 3-2.

Kitchener’s powerplay struck for the second time in the game after O’Rourke took a double-minor for high sticking Damiani. On the powerplay, Rickard Hugg and Damiani assisted on Greg Meireles’ 22nd goal of the season to tie it up 3-3.

Regulation time would end in a tie with the Rangers ahead in shots 28-23.

1:29 into the overtime period, Vukojevic found Hugg in front of the net, who spun around and backhanded it to Yantsis who slipped it past a sprawling Villalta to win the game for the Rangers.

Final shots on goal were 33-23 for Kitchener.