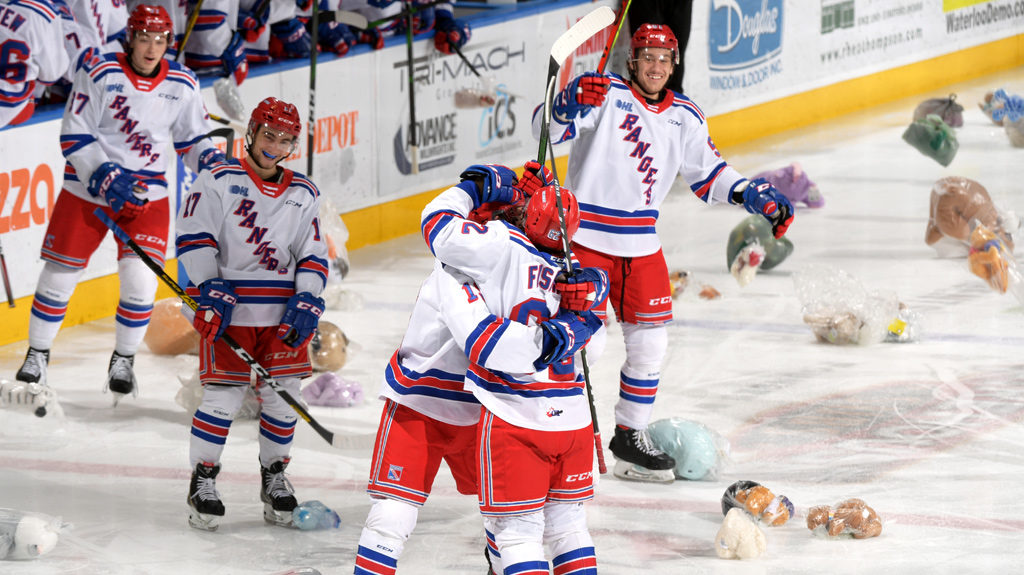 Kitchener, ON: The Teddy Bear game at The Aud featured the Rangers (14-10-2-2) and the Western Conference-leading London Knights (18-8-1-1) on Tuesday night.

The 25th teddy bear goalscorer in Rangers history was rookie right-winger Jesse Fishman who got the Rangers on the board at 3:46 of the second period.

Justin MacPherson, Jonathan Yantsis, and Reid Valade all scored in the third period to give the Rangers a 4-0 win, their seventh straight.

Despite a number of quality opportunities for both the Knights and Rangers, the opening 20 minutes featured no goals and no penalties. The Rangers led in shots 15-9.

At 3:46 of the second period, the bears came raining down on the ice at The Aud when Jesse Fishman (2) came out from behind the net and beat Dylan Myskiw short-side and high when Myskiw dropped to his knee to attempt a save. It was 1-0.

Mike Petizian picked up an assist on Fishman’s second of the season.

The early-period goal was the only one of the period and after 40 minutes, the Rangers led in shots 26-19 and in goals, 1-0.

Kitchener extended their lead at 1:41 of the third period when a wrist shot from above the right-side faceoff circle by Justin MacPherson (1) went beat Myskiw through traffic to make it 2-0.

At 9:48 the Rangers extended their lead when Reid Valade skated the puck into the offensive zone and to the side of the net before dishing it to Jonathan Yantsis (17) who tipped it in to make it 3-0.

Arber Xhekaj also earned an assist on the goal.

Riley Damiani picked up an assist on the goal as well.

Final shots in a Jacob Ingham shutout were 40-28 in favour of the Rangers.

The next home game for the Rangers is Friday, December 13 at 7:30 pm vs the Hamilton Bulldogs. The next road game is on Saturday, December 14 at 2:00 pm versus the Guelph Storm.