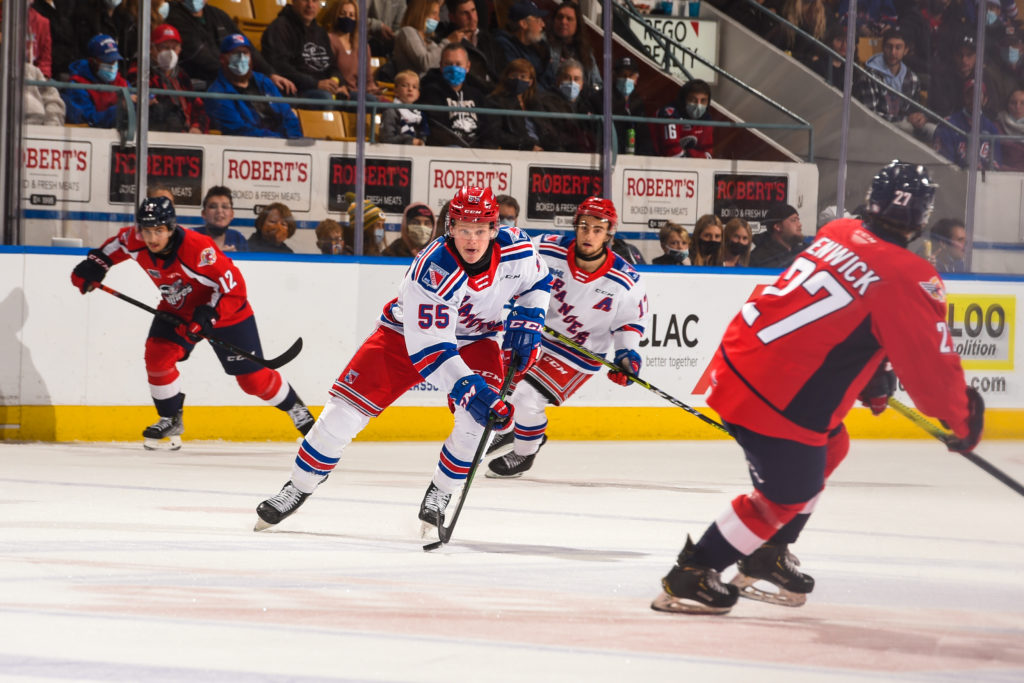 The Rangers look to respond for game two against the Spitfires after a close loss on Saturday at the WFCU Centre. Parsons started in goal for the Rangers, and Zidlicky is back in the line-up in exchange for Pugliese.

The Rangers looked to score first and succeeded as Trent Swick scored unassisted seven minutes into the first period. The Rangers get a powerplay opportunity right after the goal, as Windsors’ D’Amico gets called for high-sticking. Spitfires kill off the penalty despite lots of great chances for the Blueshirts. Swick gets called for goaltender interference and the Rangers go on the penalty kill. Reid Valade scores shorthanded with a beautiful end-to-end play to put the Rangers up 2-0. Windsor strikes back just before the end of the period, and right at the end of the powerplay to make it 2-1 Rangers.

Lots of back-and-forth action to start the second period, with Jackson Parsons making a couple of great saves to keep the Rangers up. Windsor scores 8 minutes into the second period (Johnston) to tie the game. The Rangers get another powerplay opportunity for a high-stick on Sop but are unable to capitalize on it. Cameron Mercer gets called for cross-checking and the Rangers would once again head to the penalty kill, but shortly after the Spitfires’ Henault gets called on a check to the head leading to some 4-on-4 hockey.

The third begins with lots of action in the Ranger’s end before the Blueshirts start playing more physically (massive hits from both Mutter and Schmidt) which allows for more opportunity in the Windsor end. The Spitfires get a powerplay after a slash is called on Motew, but the Rangers are able to kill it off. Later on, Jack Harper (assisted by Justin Nolet and Joseph Serpa) shows off his smooth moves, and scores on Onuska. The Spitfires pull Onuska for the final minute of play, and Joseph Serpa scores the empty netter with less than 30 seconds left. Rangers tie the series, and we head home for games 3 and 4.

Tickets can be purchased in the following ways: