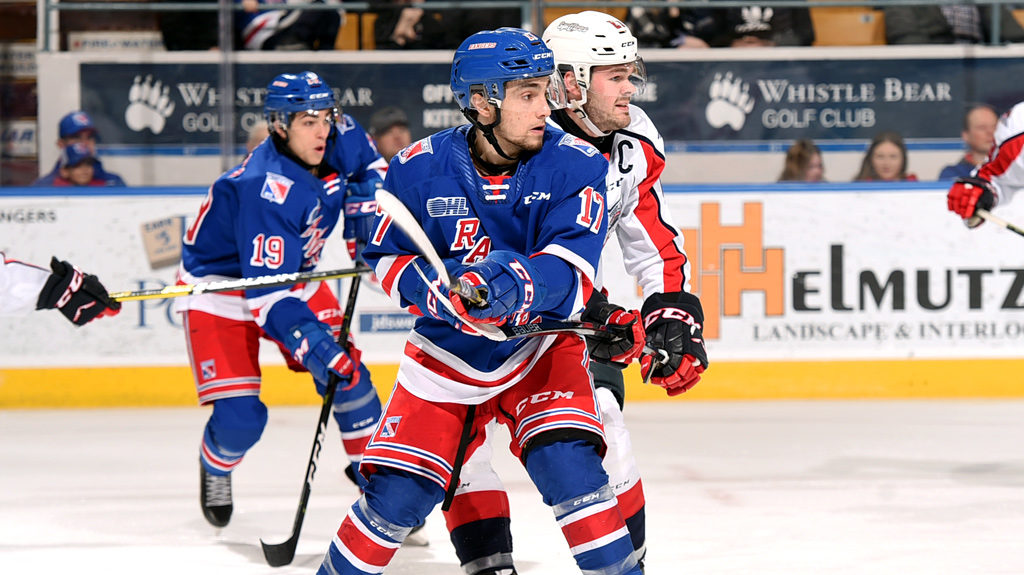 Jacob Ingham made 33 saves in the loss.

Windsor got on the board first at 6:38 when a shot from the blue line by Connor Corcoran was tipped by Wyatt Johnston (5) past Jacob Ingham to make it 1-0.

A short time later, at 7:42, the Spitfires got another goal on an identical play. A blue line shot by Grayson Ladd was tipped by Will Cuylle (15) and it was 2-0.

The Rangers cut the lead in half at 8:39. Declan McDonnell came off the bench into the offensive zone where the Rangers were cycling. Ville Ottavainen found McDonnell and he passed into the slot for Mike Petizian (10) who wristed it past Kari Piiroinen to make it 2-1.

At 10:08, Windsor restored their two-goal lead off a cross-ice pass from Daniel D’amico to Tyler Angle (21) who redirected it into the net and it was 3-1.

Once again, Kitchener brought their deficit to one at 17:37 when Graham Dickerson passed the puck to Arber Xhekaj at the blue line and the defenseman uncorked a shot that beat Piiroinen and made it 3-2.

There were no goals in the second period. Shots on goal were 8-7 in favour of the Spitfires and 26-18 overall.

It didn’t take long for the Rangers to even up the score in the third period. At just 37 seconds, Jonathan Yantsis took a shot on that that rebounded out to Riley Damiani (17) who netted and it was 3-3.

Donovan Sebrango also picked up an assist on the goal.

At 4:06, the Rangers captured their first lead of the game when Yantsis (30) broke into the offensive end, slammed on the breaks and rifled a wrister high into the back of the net to make it 4-3.

Meireles and Reid Valade picked up points on the goal.

Curtis Douglas (16) tied it up for the Spitfires at 8:08 when a scrum in front of Ingham led to a puck sneaking past his right pad. 4-4.

There would be no more goals in the third period and the game would end up going to overtime.

Shots on goal at the end of regulation were 36-26 for the Spitfires.

In overtime, with 58 seconds remaining, Connor Corcoran scored for the Spitfires while on a powerplay to give Windsor the 5-4 win.

Final shots on goal were 38-28 for the Spitfires.