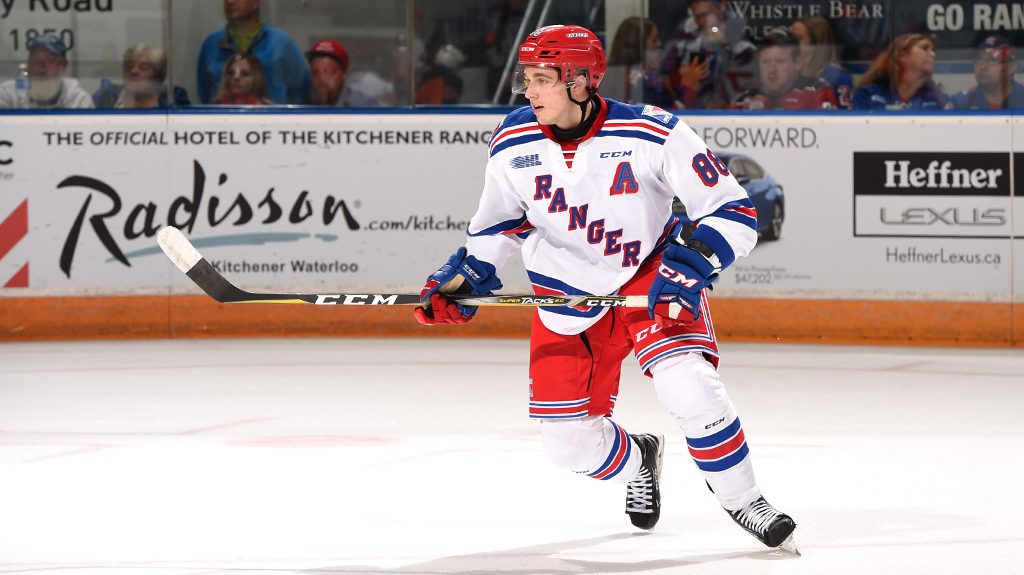 Kitchener, ON.: The Sarnia Sting were visiting the Rangers at The Aud on Tuesday night and ended up coming out of the high scoring affair as winners, 7-4.

It didn’t take long for the OHL’s second-best powerplay to get going Tuesday night. At 2:05 of the first period, after a Kelton Hatcher delay of game penalty, Rickard Hugg finished a string of passes by Greg Meireles and Joseph Garreffa with his 12th goal of the season to put the Rangers up 1-0.

A minute-and-fifteen seconds later, at 3:20, Sarnia equalized on Franco Spoviero’s fifth goal of the season. It was 1-1, and that’s how the period would end.

The second period began with a Sarnia goal at 2:31 when Adam Ruzicka netted his fourth goal of the season to give the visiting Sting their first lead of the game, 2-1.

It didn’t take long for Kitchener to erase their deficit. Meireles picked up his second assist on the night when his pass from behind the net ended up on the stick of Jonathan Yantsis, who earned his 19th goal of the season.

With the Rangers pressuring in the Sting zone, Sarnia forced a turnover at the blue line which led to a breakaway and then a goal by Ruzicka, his second of the night.

Sarnia doubled up their lead at 10:38 on a Brayden Guy goal on an assist by Ruzicka.

At 11:20 Michael Vukojevic took a high sticking penalty that led to the Sting’s fourth goal of the period, this time by Hugo Leufvenius, his 13th.

Kitchener responded on a rocket from the stick of  Nick McHugh that earned him his third goal of the season, and it was 5-3.

11-seconds later, at 13:26, Sarnia restored their three-goal lead when Sproviero picked up his second goal of the night.

In the third, Anthony Salinitri added to the Sting’s lead on a shorthanded goal at 10:56 to make it 7-3 for the visitors.

The Rangers powerplay struck again at 13:58 of the third on a goal by Eric Guest, his third of the season, and it brought the deficit to three, 7-4. Ultimately, that’s how the game would end.

Sarnia edged out the Rangers in shots 37-36.