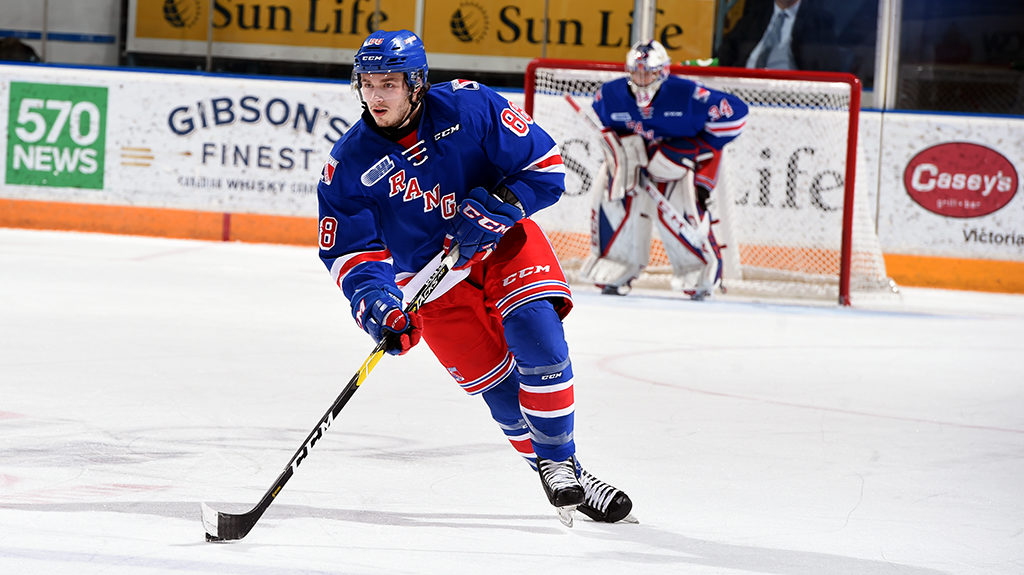 Kitchener, ON.: It was another Midwest division matchup between the Owen Sound Attack (22-19-2-2) and the Rangers (20-21-3-0) at The Aud and in Sunday afternoon’s rendition of the rivarly, the blueshirts came out on top 5-3.

Greg Meireles earned first star honours with a hat trick and an assist while Riley Damiani picked up three assists on the night to bring his weekend total to eight assists. Luke Richardson, the games second star, stopped 36 of 39 shots in the win.

The Owen Sound Attack were the first to get on the scoresheet in the form of a tripping penalty to Aiden Dudas at 6:49 of the first period. On the ensuing powerplay, Riley Damiani passed the puck down low to Jonathan Yantsis who backhanded it to Greg Meireles in front of Mack Guzda’s net.  Meireles made good on the opportunity to net his 19th and that put the Rangers up 1-0 at 7:03.

In a final push before the end of the first, the Attack were able to even the game up on Dudas’ 17th goal of the season that found the back of Luke Richardson’s net with just 0.2 seconds left in the period. Brady Lyle and Barrett Kirwin earned assists on the goal.

The first frame would end with the game knotted at 1-1 and the Rangers slightly ahead in shots, 10-9.

Kitchener came out strong to start the second period.

Flying out of their defensive zone, Mike Petizian found Jonathan Yantsis skating across the blue line on the left side. Yantsis, who was out in front of the Attack defenders, got in close of Guzda and slid the puck five-hole into the back of the net for his 33rd goal of the season. That made it 2-1 at 2:20.

At 10:09, Yantsis took a tripping penalty and Meireles took a roughing penalty to give the Attack a 5-on-3 powerplay for a full two minutes.

Despite surrendering six shots on the two-man advantage, the blueshirts stood tall and kept Owen Sound off the scoresheet. The solid defensive performance sent The Aud into a frenzy.

It was at 17:31 that Carter Robinson took an interference penalty for the attack. A short time later, at 18:03, Sushko took an unsportsmanlike misconduct for firing a puck on net after the linesman had blown the play offside.

On the Rangers 5-on-3, Damiani and Meireles hooked up with Rickard Hugg who wired home his 18th to give Kitchener a 3-1 lead.

The period would end with Owen Sound up in shots 24-17.

Riley Damiani took a hooking penalty just 37 seconds into the third period and at 58 seconds, Sushko, on a feed from Dudas, beat Richardson to bring the Attack within one, 3-2.

Moments after a Donovan Sebrango cross-checking penalty expired, the Rangers came rushing into their offensive zone. A pass from Hugg to Meireles led to the second goal of the night for number 88 and that put the Rangers up 4-2 at 7:47.

The Attack kept the pressure coming and on their 31st shot of the game, Cade Robinson scored his fourth goal of the season to bring the lead back to one for the Rangers, 4-3.

With just 40 seconds left in the game and a pulled goalie for Owen Sound, Meireles, on an assist by Damiani, completed the hat trick to put Kitchener up 5-3, which is how the game would end.

The Attack outshot the Rangers 39-24.