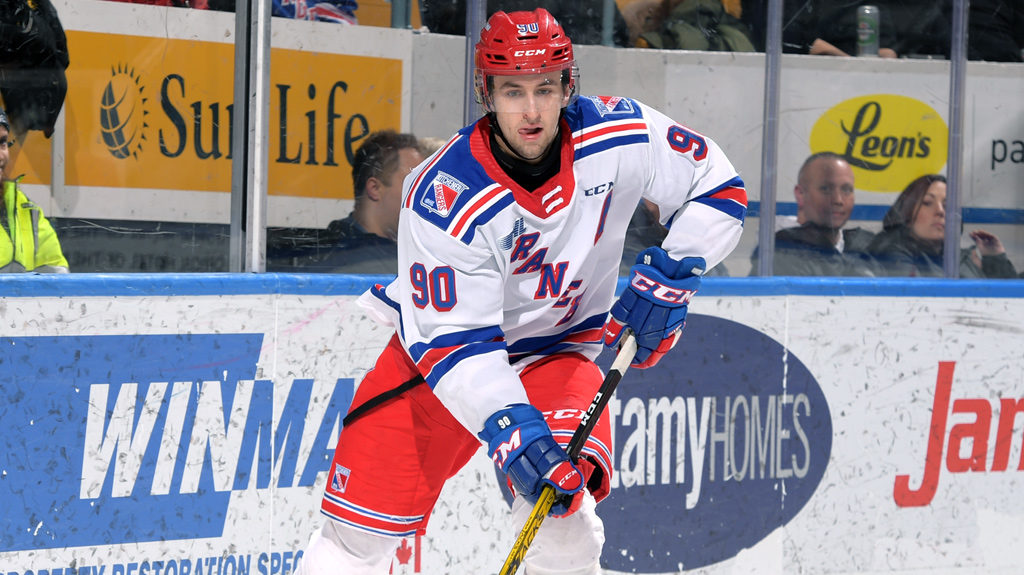 Liam Hawel scored two goals as well as the lone one for either team in the shootout. Riley Damiani and Serron Noel also picked up goals on the night.

Sergey Popov opened up the scoring for the Attack. Kaleb Pearson passed to Popov (18) from behind the net and, at 5:53, the winger spun around and scored over the shoulder of Jacob Ingham to make it 1-0.

At 12:06, Michael Vukojevic took a tripping penalty and, on the ensuing power-play, Brady Lyle (20) took a slap-shot from the blue line that deflected off the arm of Riley Damiani and past Ingham to extend the Attack lead to 2-0.

Lyle (21) added another at 14:19 as he came off the bench and received a pass at the blue line again that he then stepped into for a hard shot that beat Ingham again to make it 3-0.

At the end of the first period, shots on goal were 12-7 in favour of the Attack.

The Rangers got one back at 3:17 when Hawel (20), streaking down the left side of the ice, cut across the top of the crease and slid it into the net to cut the Attack lead to 3-1.

Igor Chibrikov (6) got a goal back for the Attack when he fired a shot past the glove hand of Ingham to make it 4-1 at 8:43.

Barrett Kirwin took a high sticking penalty at 16:26 and gave the Rangers their second power-play of the night. On the man-advantage, a cross-ice pass by Hawel to Riley Damiani (28) resulted in the captain rifling a shot past Mack Guzda to cut the lead in half, 4-2.

Axel Bergkvist had the second assist on the goal.

At 3:01, while short-handed, the Rangers got the puck deep into the Attack zone. Mike Petizian, from the corner of the boards, passed out to an unmarked Serron Noel (17) planted at the top of the crease who jammed it home to make it 4-3.

Vukojevic also picked up an assist on the goal.

The Petizian-Hawel connection proved effective once more a few minutes later. On a rush into the offensive zone, Petizian banked a drop-pass to Hawel along the sideboards before the latter walked into the slot and wired a shot just inside the far post past Guzda’s glove hand to tie it 4-4.

Vukojevic earned his second assist of the night on the game-tying goal.

After regulation, shots were tied 37-37.

In overtime, there were a number of chances for both sides but neither goalie could be beat.

In the shootout, Hawel was the only goalscorer and gave the Rangers the win 5-4.

The next Rangers home game is this Tuesday March 3 at 7:00 pm versus the London Knights.