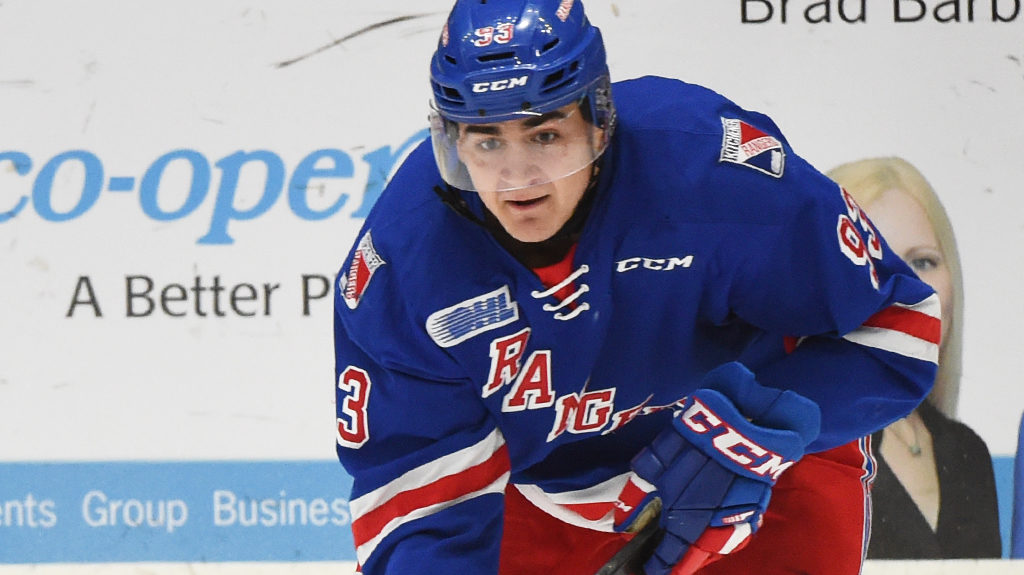 North Bay, ON.: The Rangers (13-17-3-0) visited the Battalion (13-18-1-1) in a wild affair at the Memorial Gardens that featured six goals in under eight minutes in the second, five straight goals to end the game by the Battalion, and a hat trick by Jonathan Yantsis.

Greg Meireles picked up two assists on the night and that extended his point streak to 10 games.

It only took 1:34 for the Rangers to get a goal on the board at the North Bay Memorial Gardens. Jonathan Yantsis, on a pass from Kyle Gentles, slid his 21st past the Battalion’s Christian Propp to put Kitchener up 1-0.

A short time later, North Bay took successive penalties just 29 seconds apart to give Kitchener a 5-on-3 advantage for 1:31.

On the two-man advantage, Garreffa made a thread-the-needle pass that ended up perfectly on the stick of Yantsis who made good on the opportunity to net his second of the night and 22nd of the year and at 12:53 it was 2-0.

Meireles picked also picked up an assist on second goal, which meant his consecutive games with a point streak would reach 10.

At 14:52, the Battalion halved the Rangers lead on a goal by Daniel Walker with assists from Theo Calvas and Brandon Coe. 2-1.

The first period would end with shots in favour of the Rangers, 12-8.

Each team traded fast starts in the opening two periods. At 2:38 of the second, Adam McMaster scored on a two-on-one that had Luke Richardson sprawled out but unable to stop the centre’s 13th goal of the season to make it 2-2.

North Bay took their first lead of the night on a Brad Chenier slapshot that snuck just under the pad of Richardson to make it 3-2.

The lead wouldn’t last, however. Rickard Hugg buried his 16th of the season on an assist by Meireles, his second of the game, and it was 3-3.

Then, at 6:13, the Rangers went back up by two when Garreffa scored his ninth on an assist by Eric Guest. 5-3.

The period’s sixth goal came just 7:58 into the frame when North Bay’s leading goalscorer, Justin Brazeau, rifled home his 27th and that made it 5-4.

North Bay outshot Kitchener 12-8 in the second period and overall, shots on goal going into the third were 20-20.

It was 2:52 into the third period that the Battalion tied up the game for the second time on the night when Brazeau (28) netted his second and it was 5-5.

The Batallion then took the lead when Nick King fed the puck past two Rangers defensemen and onto the stick of Walker who, on the ensuing breakaway, beat Richardson for his second of the night to make it 6-5.

North Bay extended their lead at 10:00 on Chenier’s 14th goal of the season which put Kitchener down two, 7-5.

At 18:48, Matthew Struthers scored the Battalions fifth goal in a row on an empty net to make it 8-5, and that’s how the game would end.