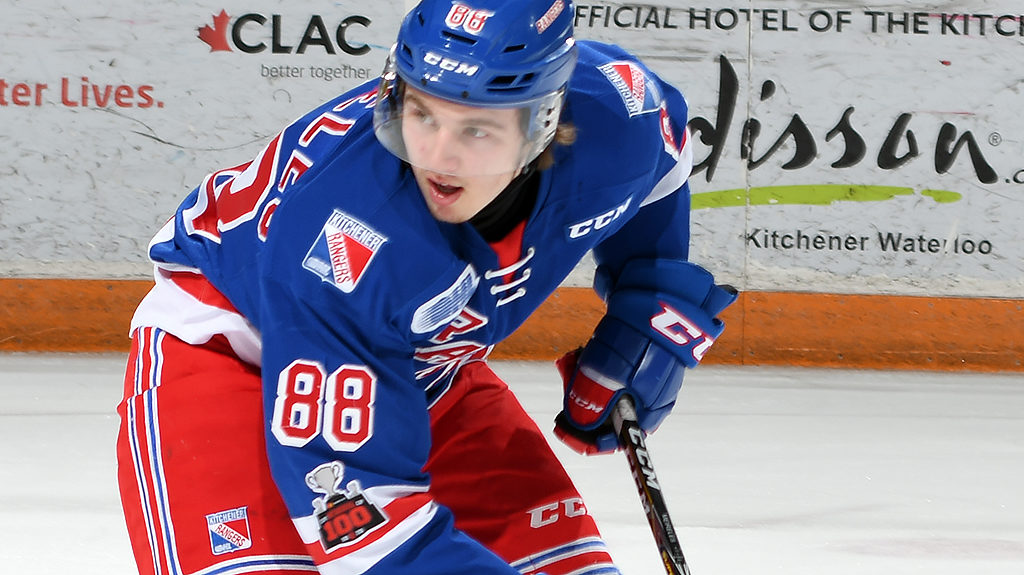 Barrie, ON.: Jonathan Yantsis (18) scored two goals, one of which being with 29-seconds left in the game to help the Rangers squeak out a 5-4 win in Barrie on Saturday night.

Barrie native Luke Richardson stopped 26 shots in the win to give Kitchener their second win in as many nights.

Riley Damiani and Greg Meireles both scored a goal and picked up two assists.

At 3:38 of the first period, Barrie’s Tyler Tucker dumped the puck into Kitchener’s zone, but the puck took a bizarre bounce that caught Luke Richardson off guard and found the back of the net to put the Colts up 1-0.

It was mere seconds into the Rangers first powerplay, a tripping penalty by Joey Keane, that their leading scorer, Jonathan Yantsis, had his opportunity with an odd bounce. The bounce off the back-boards turned into his 17th goal of the season. Greg Meireles picked up an assist on the goal.

Barrie restored their one-goal advantage just under two minutes later when a shot came off a Kitchener defender and right onto the stick of Matthew Hill who scored his first goal of the season to make it 2-1, which is how the period would end.

The Rangers outshot the Colts 14-9 in the opening frame.

14-seconds into the second period, Barrie’s Tyler Tucker took a hooking penalty and at 1:40, Riley Damiani picked up his fourth goal in the past two games to tie the contest up, 2-2.

Meireles and Joseph Garreffa earned assists on the goal.

16-seconds later, at 1:56, Barrie took yet another penalty, their third of the game, and for the third time on the night, Kitchener capitalized. This time it was Meireles who buried it on assists from Garreffa and Damiani to give Kitchener their first lead of the game, 3-2.

At 8:03, Mike Petizian, on an assist from Reid Valade, added an insurance goal for the Rangers, his second of the season, after a shot in front a screened Maksim Zhukov found the back of the net to make it 4-2.

Michael Vukojevic, at 16:33, took a slashing penalty to stop a Colts breakaway attempt on goal. Despite a few chances by the Colts, the Rangers penalty kill fended off Barrie’s second powerplay of the night.

The period would end with the Rangers maintaining their 4-2 lead on the scoreboard and tied in shots 23-23.

Barrie began the final frame on the offensive when Lucas Chido found Jaden Peca a split moment before he and the puck found their way into the back of Richardson’s net to whittle Kitchener’s lead to one, 4-3.

The Colts continued to go hard at the net of Richardson and at 14:42 of the third, Aidan Brown fired home his third goal of the season to even the game up, 4-4.

With just 29-seconds to go in the third, Jonathan Yantsis found himself on a breakaway and he didn’t miss, beating Zhukov for his second of the night and 18th of the season.