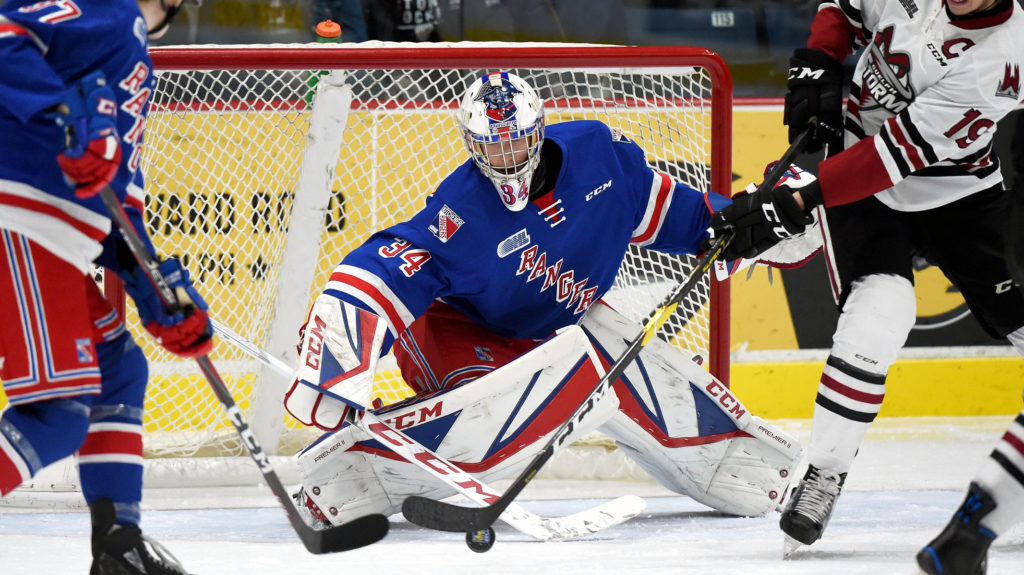 Peterborough, ON.: The Rangers visited the Peterborough Petes in what ended up being a 5-3 win for the Blue Shirts.

Jonathan Yantsis picked up a goal and an assist while Chase Campbell, the game’s third star, scored twice to raise his season goals total to four.

Greg Meireles picked up his eighth goal of the season and Justin MacPherson scored his first on the year. Rickard Hugg also had a two-point night with a pair of assists.

Luke Richardson earned first-star honours by stopping 40 of the 43 shots he faced to help bring Kitchener’s point total on the season to 18.

At 4:49 of the first period, the Rangers forced a tripping penalty against Cole Fraser, which led to Yantsis’ 13th goal of the season 44-seconds into the powerplay.

Riley Damiani and Hugg picked up assists on the goal.

Jack York took a checking from behind penalty at 17:04 of the opening frame and it led to a powerplay goal by Erik Čermák to tie it up 1-1, and that’s how the period would end.

The Petes outshot the Rangers 13-10 going into the intermission.

Čermák opened up the scoring at 2:53 of the middle frame with his second of the night and third of the season to put the home side up 2-1.

Shortly after the Rangers killed a Michael Vukojevic holding penalty, the Blue Shirts strung together a series of perfect passes that culminated in Campbell netting his third goal of the season to tie it up 2-2 at 6:07.

Yantsis picked up his second point of the night and Joseph Garreffa got on the scoresheet with assists on the goal.

MacPherson, at 10:44,  came roaring out the penalty box after getting called for a slash and scored his first goal of the season to put the Rangers back up on top, 3-2.

Arber Xhekaj took a roughing penalty at 14:33, the Rangers third of the period. After a 3-on-2 shorthanded rush by Kitchener was stopped by Peterborough’s Hunter Jones, the Petes broke out the other way on a 4-0n-2 that ended with Christopher Paquette scoring his 11th of the season and that made it 3-3.

Almost immediately after another penalty to the Petes’ ended at 16:48, Chase Campbell scored his second goal of the night to put the Rangers on top 4-3 and that’s how the period would end.

Peterborough led in shots going into the third, 36-15.

Besides a couple Petes penalties, the third period saw no scoring until 19:32 when Greg Meireles sealed the deal for the Rangers with an empty net goal.

Kitchener returns to action on Friday, November 9 at 7:30 pm when the Sarnia Sting visit The Aud. The Rangers next road game is Sunday, November 11 at 2:00 pm versus the London Knights.