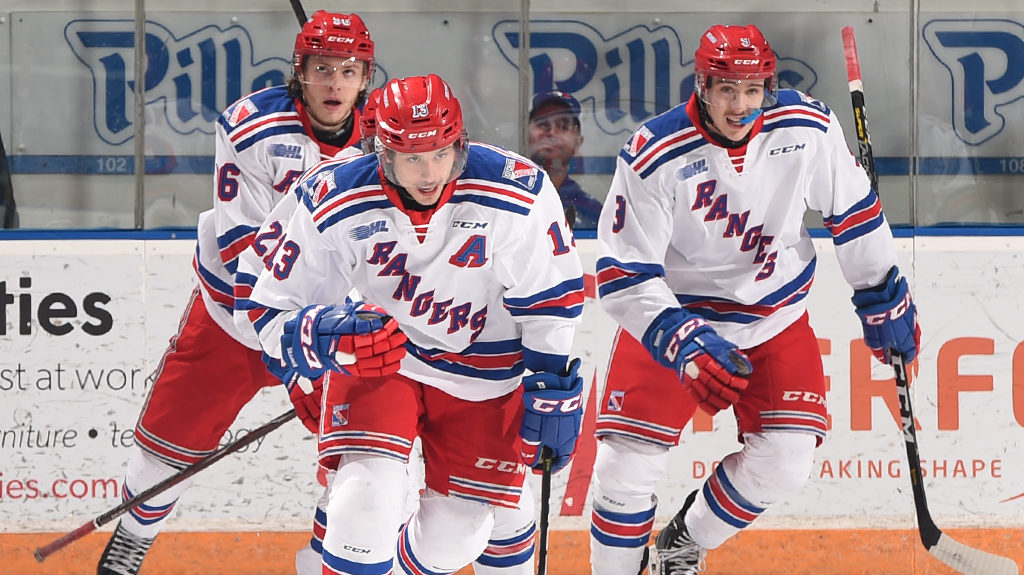 Kitchener, ON.: It was a night to remember for Riley Damiani who picked up three goals and one assist in a 5-2 win over the visiting Saginaw Spirit.

Rickard Hugg tallied a goal and both he and Nick McHugh earned two assists as well.

Lucas Pfeil has an outstanding night between the pipes, stopping 30 of 32 shots, which was good enough for his third win of the season.

The night’s first action on the scoresheet came on the Rangers sixth shot of the game. At 9:07, Riley Damiani was fed the puck from behind the net and made good on the opportunity to put Kitchener up 1-0 on his 9th goal of the season.

Nick McHugh and Rickard Hugg picked up assists on the goal.

At 18:24 of the opening period, seconds after a Camaryn Baber penalty expired, the Rangers found the back of the net for the second time. Alexey Lipanov scored his fourth on assists from Chase Campbell and Donovan Sebrango.

At 6:02 of the second period, Saginaw’s Danny Katic found himself on a breakaway that beat Kitchener’s Lucas Pfeil for his first goal of the season and that cut the Rangers’ lead in half, 2-1.

After a number of chances for Hugg weren’t able to turn into goals, his efforts paid off at 11:34 of the middle frame on a wrist shot that beat Prosvetov’s glove hand to put the Rangers back up by two, 3-1.

Hugg’s 11th of the season was assisted by Damiani.

At 12:01, Saginaw’s DJ Busdecker took a match penalty for a slew-foot, which gave Kitchener a powerplay for five minutes.

On that powerplay, crisp passing led to a tic-tac-toe goal that was finished by Damiani, his second of the night, and just like that it was 4-1.

Garreffa and Hugg picked up assists on the Rangers’ fourth goal.

Going into the second intermission, the Rangers continued to lead in shots 34-15.

The Rangers started the third period by picking up where they left off.

Damiani got his hat-trick goal at 4:59 on an assist by McHugh and Kitchener’s lead was extended to 5-1.

With 1:16 remaining in the game, the Spirit’s Aiden Prueter scored his fourth of the season to make it 5-2 and that’s how the game would end.

The Rangers next game is Saturday, November 17 at 7:30 pm versus the Barrie Colts. Kitchener returns home on Tuesday, November 20 at 7:00 pm to play the Sarnia Sting.