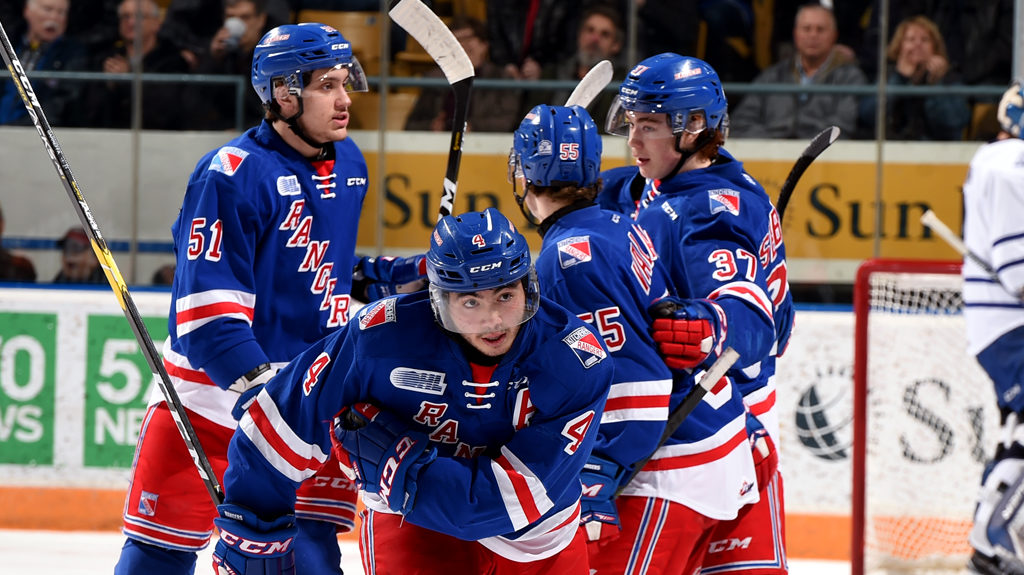 Kitchener, ON: The Mississauga Steelheads (29-23-5-2) were at The Aud to play the Rangers (29-26-3-1) for the only time this season. The Rangers scored two goals in each of the first two periods and then added one more in the third to defeat the Steelheads 5-2.

Joseph Garreffa picked up two goals and one assist and Luke Richardson stopped 28 in the win.

The Rangers opened up the scoring at 3:06 of the first period when a shot from just in front of the blue line from Cole Cameron took a rebound off the pads of Jacob Ingham, and went right to Rickard Hugg who made a move around the goaltender to score his 29th and make it 1-0.

At 12:09, with only four skaters on the ice for both teams due to a couple penalties, Alan Lszczarczyk fed the puck to Richard Whittaker who fired it past Luke Richardson to make it 1-1.

Kitchener restored their lead late in the period at 17:37 when some nice offensive-zone passing by Donovan Sebrango and Reid Valade found Joseph Garreffa who squeezed one past the pad of Ingham on his short-side. 2-1.

The period would end with the Rangers slightly ahead in shots, 12-11.

At 7:50 of the second period, shortly after a high sticking penalty against the Steelheads, Greg Meireles passed to Riley Damiani who found Jonathan Yantsis in front of the net and the Rangers leading goalscorer didn’t miss the chance to net his 41st and extend the Rangers’ lead to 3-1.

Greg Meireles got in on the goalscoring with his 31st of the year when he banked the puck off Ingham and in from the trapezoid behind the net. The goal made it 4-1 Rangers.

Garreffa and Mike Petizian earned assists on the play.

At 17:31, Nick Isaacson found himself on a 2-on-1 break heading into the Rangers zone and the left-winger chose to keep the puck and shoot, which ended up beating Richardson to cut Kitchener’s lead in half, 4-2.

The period would end with the Rangers still ahead in shots, 26-20.

At 12:44 of the third period, Garreffa capped off his first-star performance with his 24th goal of the season, unassisted, to make it 5-2.

The game would end with the Rangers outshooting the Steelheads, 32-20

The Rangers next home game is on Friday, March 1 at 7:30 pm vs the London Knights. The next road game for Kitchener is on Wednesday, February 27 at 11:00 am versus the Mississauga Steelheads.