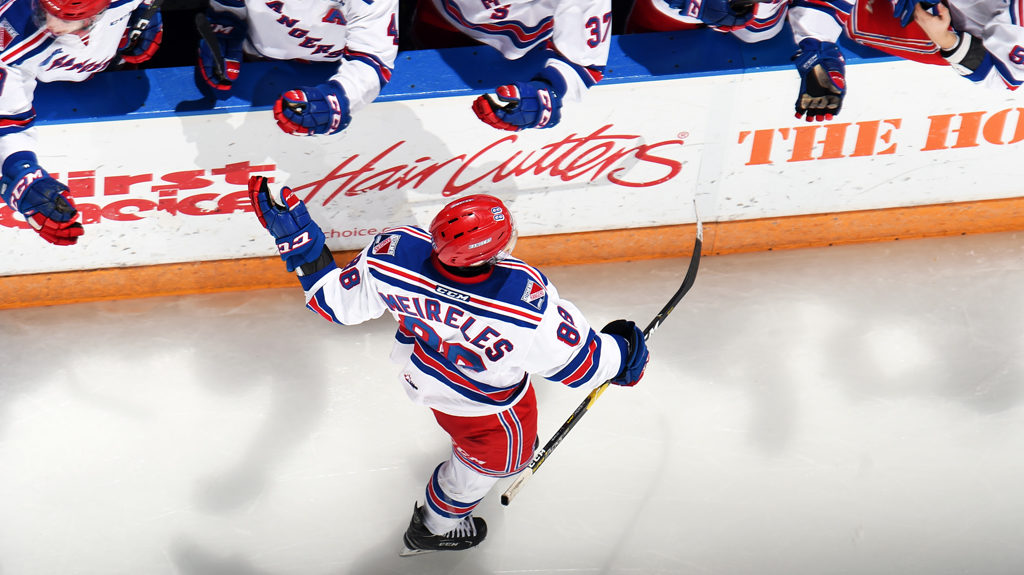 Guelph, ON: It was the final regular season rendition of the Highway 7 rivalry between the Guelph Storm (37-18-6-4) and the Kitchener Rangers (32-29-3-1) at the Sleeman Centre on Sunday afternoon and the visitors managed to even up the season series at four games apiece winning 5-2.

Riley Damiani led the way for the Rangers with one goal and three assists while Greg Meireles brought his season points total to 92 with a goal and two assists, and Joseph Garreffa extended his point streak to 12 games with a goal and an assist of his own.

Luke Richardson stopped 25 in the win.

Riley Damiani opened up the scoring on the afternoon at 6:16 of the first period. Ryan Stepien, from in behind Anthony Popovich’s net, cleared the puck to the front of the net where the Dallas Stars prospect was waiting and Damiani wired home his 26th goal of the season to make it 1-0.

Guelph took three penalties and Kitchener, two, but both Popovich and Luke Richardson had themselves solid performances between the pipes through 20 minutes and the score remained the same.

The Rangers slightly outshot the Storm in the first period, 9-8.

While on the powerplay, 49 seconds into the second period, Jonathan Yantsis scored his 45th of the season when Greg Meireles found the big winger in front of the net and the Markham, Ontario native went high on Popovich to make it 2-0.

The goal by Greg meant his point streak was extended to 17 games.

Damiani also picked up an assist on the goal that allowed Yantsis to increase his OHL-leading powerplay goals total to 22.

Domenico Commisso took a roughing penalty at 5:25 and on the ensuing powerplay, the second best powerplay in the league got to work. Damiani and Joseph Garreffa earned assists on a laser by Greg Meireles that went top corner to make it 3-0.

The assist by Garreffa meant his point streak was extended to 12 games.

On yet another powerplay for the Rangers, captain Rickard Hugg made a huge kick save on a shorthanded opportunity by the Storm before finding himself on a break into the offensive zone that ended up in a goal to make it 5-0 on Kitchener’s third powerplay goal of the period.

The period would end with the Rangers pulling away in shots, 23-14.

Guelph finally found a way past Richardson at 1:57 of the third period when Zachary Roberts passed to Fedor Gordeev who fired a shot from just in front of the blue line past the Rangers netminder to make it 4-1.

Kitchener struck back during a four-on-four when Mike Petizian found Garreffa skating hard out of the defensive zone, in front of all Storm defenders and on the breakaway, Garreffa scored his 30th to make it 5-1.

Just as a Justin MacPherson penalty expired, Mackenzie Entwistle was the benefactor of a pass by Markus Phillips on Richardson’s far-side that led to a five-hole goal for the Arizona Coyote prospect to make it 5-2 at 14:08.

Kitchener would hold onto their three-goal lead as time expired in a victory where they outshot Guelph 30-27.

The Rangers next home game is on Friday, March 15 at 7:30 pm vs the Owen Sound Attack. The next road game for Kitchener is on Wednesday, March 13 at 7:00 pm vs the Erie Otters.