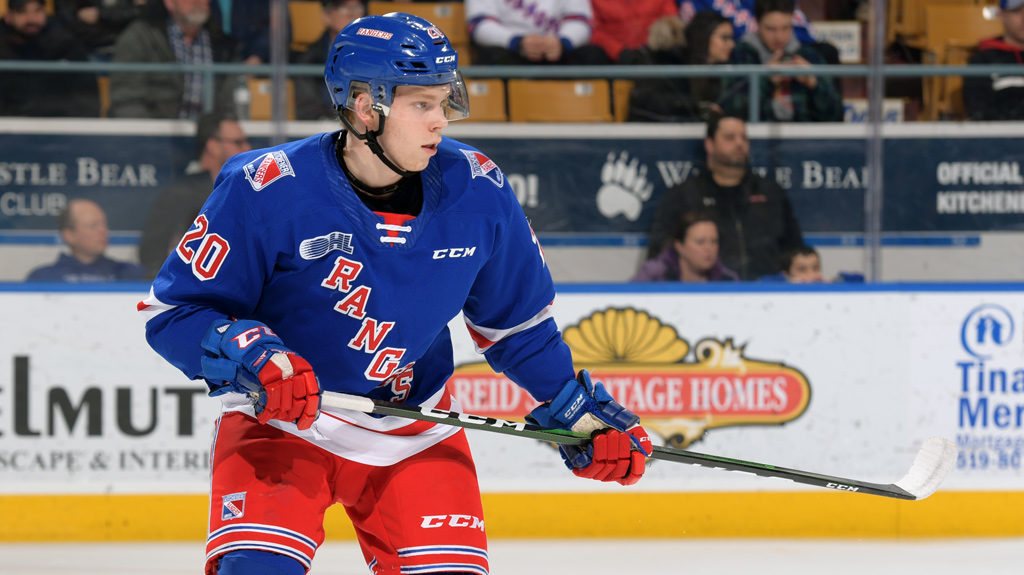 Isaac Langdon shone as he earned first star honours with two goals and an assist. Jacob Ingham stopped 42 shots in the win that allowed the Rangers to go 3-0 on the weekend.

Andre Bakanov (8) opened up the scoring for the Storm at 7:34 of the first period. Jacob Maillet forced a turnover behind the Rangers net and passed out front to the streaking left-winger who fired it home to make it 1-0.

Guelph added to their lead at 16:09 when Eric Uba (16) put a puck on net that took a redirection past Jacob Ingham that made it 2-0.

At 17:30, Cam Hillis (16) batted a passed puck past Ingham who was sprawled out on the ice after making a save a moment earlier. The goal extended the Storm lead to 3-0.

Kitchener got on the board at 12:13 of the second period when an attempt on the net by Mike Petizian (12) went off the end board before going off the back of goaltender Owen Bennett’s mask and into the net. That made it 3-1.

Holden Wale and Liam Hawel earned assists on the goal.

With just 10-seconds left in the period after a number of quality last-minute chances on net, Isaac Langdon (4) buried a rebound from a shot by Hawel to bring the Rangers within a goal, 3-2.

At 1:00 of the third period, Uba stripped the puck deep in the Rangers zone and snapped a shot past Ingham to double the Storm’s lead, 4-2.

Less than a minute later, at 1:47, Arber Xhekaj fired a shot from the blue line through traffic and past Bennett to bring the Blueshirts within one, 4-3.

Jonathan Yantsis and Riley Damiani each earned assists on the goal.

At 3:03, a Joseph Serpa pass from behind the net to Langdon (5) led to his second goal of the night and the Rangers evened up the score for the first time that afternoon, 4-4.

The second assist on the goal was given to Michael Vukojevic.

Kitchener took their first lead of the game at 16:23 when a pass in the crease from Donovan Sebrango was tapped into the net by Damiani (and) and it was 5-4.

Yantsis picked up another assist on the go-ahead goal.

The final shots on goal were 46-35 in favour of the Storm.