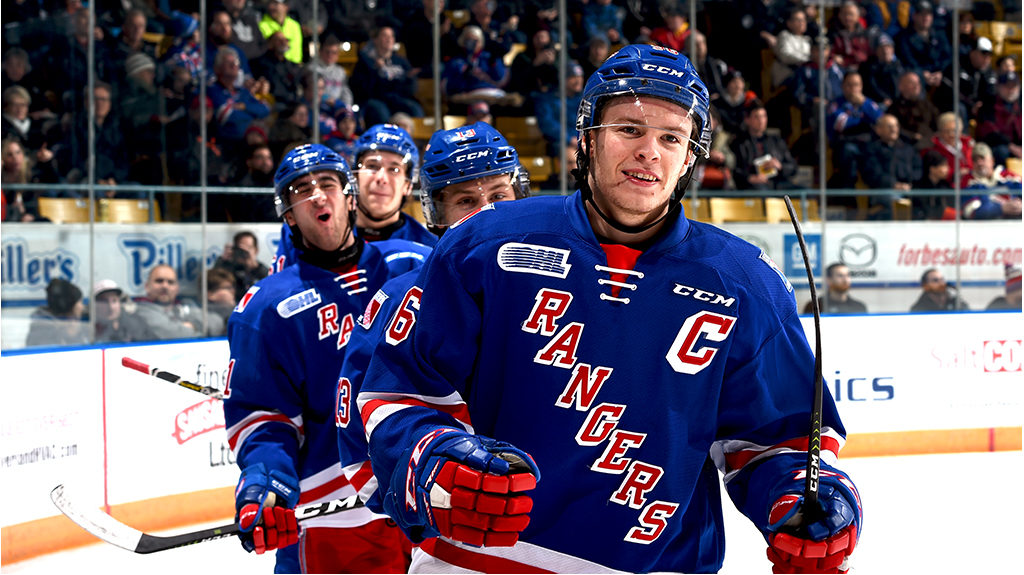 Kitchener, ON.: The sixth of eight meetings between the Owen Sound Attack (23-22-2-2) and the Rangers (23-22-3-0) went down at The Aud on Friday night and it was the Blueshirts who came out victors, beating the visitors 6-1 to improve to 5-1 in the Midwest division rivalry.

Rickard Hugg tallied a hat trick on the night to bring his season goal total to 22 while Riley Damiani scored one goal, his 19th, and earned three assists in the win. Luke Richardson stopped 34 of 35 in the win. All three aforementioned players were rewarded with star honours for their performances.

It took just 33 seconds for the Rangers to get on the board on Friday night at the Kitchener Memorial Auditorium.

Riley Damiani, on a wraparound, slid the puck past the left pad of Andrew MacLean and the unassisted goal made it 1-0.

Cade Robinson took a goaltender interference penalty at 4:32 after knocking over Luke Richardson and that sent the Rangers to the powerplay for the first time on the night.

As the powerplay was winding down Alexey Lipanov found Isaac Langdon alone in the middle of the ice, just above the faceoff spots, and the Belleville native made good on the opportunity for his 5th goal of the season to put the Rangers up 2-0 at 6:08.

Donovan Sebrango also earned an assist on the goal.

At 18:17 Damiani and Ryan Stepian linked up with Rickard Hugg who found a way to sneak the puck through the five-hole of MacLean and trickle into the back of the net to make it 3-0, which is how the period would end.

At 2:59 the second period saw its only action on the scoreboard. Damiani won a faceoff to the left of MacLean and he immediately passed it to an open Hugg on the Attack netminders right side and that led to the captain’s second goal of the night which made it 4-0.

The period would end with Kitchener on a 5-on-3 but the score would remain unchanged going into the third.

The Rangers maintained their slight lead in shots, 23-21.

Joseph Garreffa got in on the action at 5:43 of the third period when he buried a pass from Michael Vukojevic to make the game 5-0.

At 16:39 Cole Cameron took a delay of game penalty and on the ensuing powerplay, going the other way, Damiani hooked up with Hugg and number 96 earned his hat trick goal, shorthanded, to put the Rangers up 6-0.

Owen Sound did manage to net one on the powerplay. Adam McMaster scored his 14th on an assist from Carter Robertson to make it 6-1, but that’s as close at the Attack would get.

Owen Sound edged out the Rangers in shots 35-31.