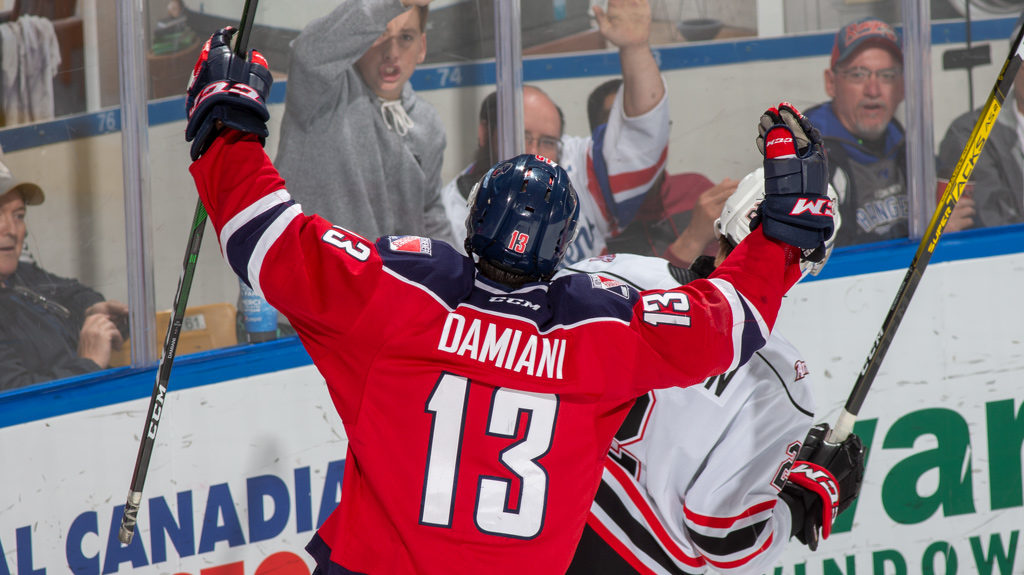 Kitchener, ON: The Rangers (2-1-1-1) returned home after a northern road trip to face their divisional rivals, the Owen Sound Attack (2-2-0-1) at The Aud.

Despite the Attack jumping out to a 2-0 lead in the first period, the 40 minutes that followed were dominated by the Rangers and, most notably, Riley Damiani, who earned himself a hat trick on the night.

Owen Sound opened up the scoring at 2:26 when a puck off the end board from Adam McMaster found Deni Goure, who slid the puck between the goal post and Jacob Ingham’s pad to put the Attack up 1-0.

Simon Motew took a slashing penalty at 8:37 and, as that penalty was winding down, Carter Robertson fired a shot from a step inside the blue line that was deflected into the net by Kaleb Pearson to make it 2-0 for the Attack.

The Rangers got on the board at 13:05 when Riley Damiani (2) went forehand, backhand, forehand to deke out Mack Guzda and cut the deficit in half, 2-1.

At 12:18 of the second period, the Rangers evened up the contest. Francesco Pinelli (5) scored on a cross-ice pass from Greg Meireles to make it 2-2.

Jonathan Yantsis also earned an assist on Pinelli’s fifth goal in as many games to start his Ontario Hockey League career.

Just under two minutes later, at 14:13, a backdoor pass to Damiani from Hawel resulted in the co-captain’s second goal of the night to give the Rangers their first lead of the game, 3-2.

Declan McDonnell picked up an assist on the goal as well.

Kitchener added their fourth goal of the period at 16:49 when Mike Petizian passed to Motew who fired a shot that was tipped by Ryan Stepien at the side of Guzda’s net to put the Rangers up 4-2.

At the end of the second period, the Attack remained ahead in shots 30-27 despite being outshot 19-9 in the period.

Owen Sound closed the lead to one at 1:08 when a defensive zone turnover ended up earning Daylon Groulx his fourth goal of the season. It was 4-3.

Tne Rangers restored their two-goal advantage just six seconds later when Greg Meireles, in his first game back with the Rangers, had his shot tipped by an Attack player to make it 5-3.

Yantsis picked up his second assist of the night on the goal.

At 10:27, Donovan Sebrango drew a holding penalty from Robertson that put the Rangers on the power-play.

On the ensuing power-play, at 10:53, Meireles, on a pass from Sebrango, went in on Guzda before dishing the puck to Damiani at the face-off circle on the far side. The centreman rifled it past the Attack goalkeeper to complete the hat trick and make it 6-3.

With 34.1 seconds left in the game, Barret Kirwin scored for the Attack to make it 6-4.

That’s as close as the contest would get. The Attack out-shot the Rangers, 41-37.