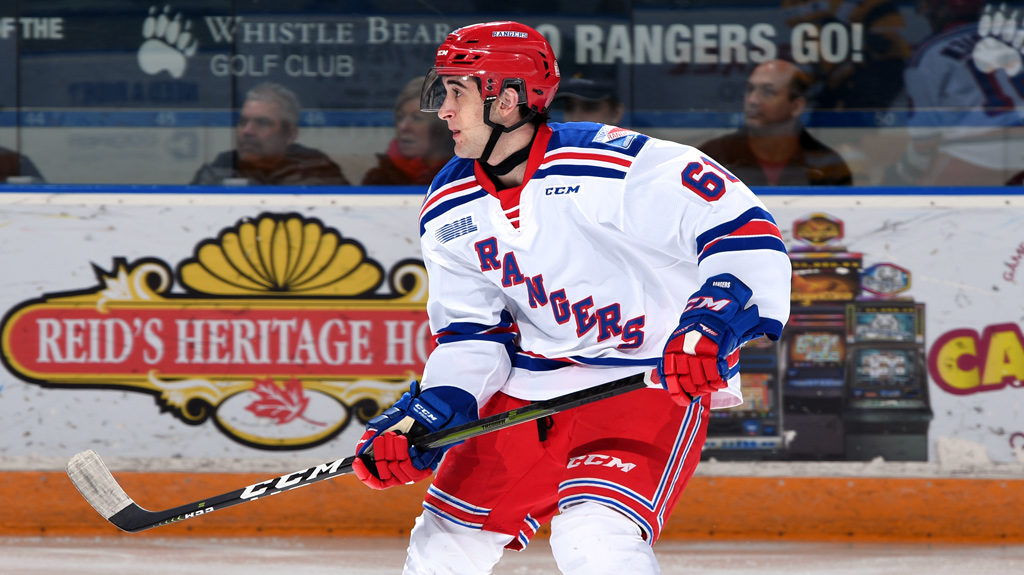 Kitchener, ON: The Rangers first game of the Preseason Showcase at The Aud was against the North Bay Battalion.

Despite being down 5-2 in the third period, Kitchener exploded for four unanswered goals to win the game 6-5.

Ryan Stepien, Joseph Serpa, Jonathan Yantsis, Greg Meireles, Riley Damiani, and Reid Valade were all goal scorers on a night that saw the Rangers get 61 shots on goal. Luke Richardson stopped 15 shots in the win.

The Rangers opened up the scoring at 8:17 of the first period, when an odd-man rush into the Battalion zone saw Joseph Serpa hit Ryan Stepien with a cross-ice pass that the left-winger fired past netminder Joe Vrbetic to make it 1-0.

Simon Motew also picked up an assist on the goal.

At 12:20, North Bay evened up the contest when Liam Arnsby, on a pass from Vrbetic, found Paul Christopoulos backdoor to knot it up, 1-1.

The opening 20 minutes of play ended in a tie score with the Kitchener outshooting North Bay 25-7.

At 1:43 of the second period, the Battalion capitalized on their man-advantage when Brandon Coe fired home a one-timer blocker-side on Richardson to make it 2-1.

It didn’t take long for the Rangers to respond when a scramble in front of the net ended up with the puck on the stick of Serpa who scored the first goal on his second point of the night to make it 2-2 at 3:05.

Just 10-seconds later, Brad Chenier, streaking across the Rangers blueline fired one past Richardson to give the Battalion the lead, 3-2.

The Battalion doubled their lead at 12:50 during 4-on-4 play. Harrison Caines fired a shot past Richardson from just above the faceoff circle to make it 4-2. The goal was unassisted.

After 40-minutes of play, the Rangers remained down by two despite outshooting the Battalion 45-15.

A tripping penalty was given to Reid Valade at 3:51 of the final frame and on the ensuing powerplay, the Battalion’s Mat Hardwick scored to make it 5-2 at 5:02.

Joshua Currie and James Mayotte earned assists on the goal.

Coe took his second penalty of the game at 7:55 and on the powerplay, Jonathan Yantsis tipped in the Rangers third goal to make it 5-3.

19-seconds later, Greg Meireles pulled Kitchener within one on a goal in front of the net and it was 5-4.

At 12:40, while shorthanded, Riley Damiani came flying into the Battalion zone and scored the game-tying-goal, 5-5.

The fourth goal of the period for the Rangers came at 14:38 when Reid Valade, on assists from Isaac Langdon and Justin MacPherson, scored to give Kitchener the lead, 6-5.

The game would end in favour of Kitchener who out-shot North Bay 61-20.

Preseason Showcase action continues for the Rangers tomorrow at 7:00 pm versus the Saginaw Spirit.