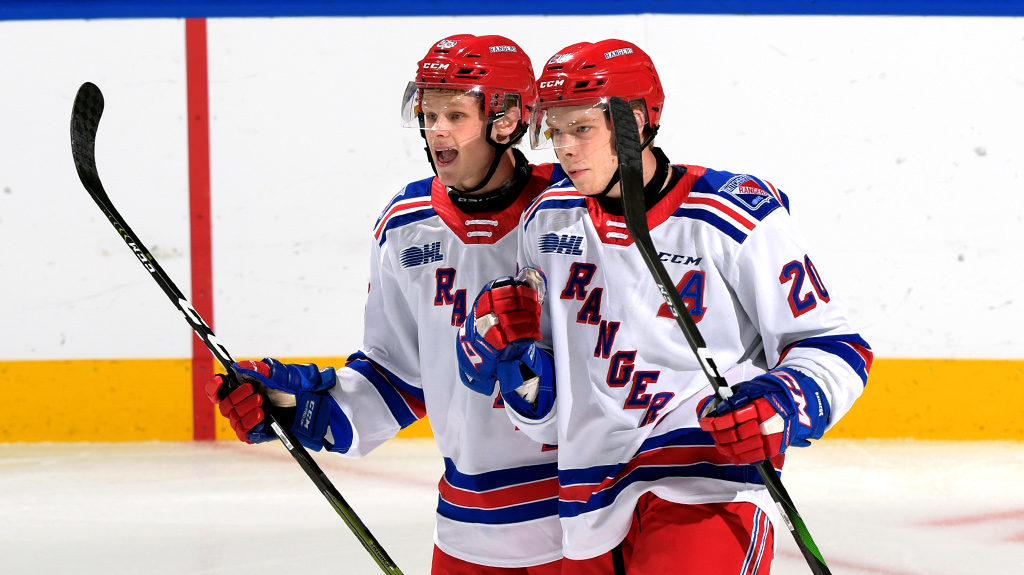 Kitchener, ON: The last home game of the Rangers preseason was versus the Barrie Colts at The Aud.

The Rangers had the lead three separate times during the game but held onto the lead that mattered as the third period came to an end to win 6-5.

Ville Ottavainen scored twice for Kitchener⁠—both on the powerplay⁠—and had an assist while Nathan Torchia stopped 33 of 38 shots in the win.

The scoring started at 8:33 of the first period when Isaac Langdon tipped a Joseph Rupoli shot by Colts goaltender Matteo Lalama to make it 1-0 for the Rangers.

Mike Petizian also picked up an assist on the opening goal.

As a powerplay for the Rangers expired with under a minute left in the period, Arber Xhekaj scored a goal to make it 2-0. Langdon and Mike Petizian both picked up assists on the insurance goal.

When the first period came to an end, the Rangers led in shots 10-7.

Two penalties came each to the Rangers and Colts at 3:12 of the second period, which resulted in Rupoli getting a goaltender interference penalty and a roughing penalty to put the Colts on the powerplay for four minutes.

On the ensuing powerplay, after a big save from Nathan Torchia and two posts hit, the Colts finally managed to get on the scoreboard. At 6:26 Tyson Foerster scored to cut the Rangers lead in half, 2-1.

At 11:42, Foerster was the benefactor of a turnover at the Rangers blueline and the right-winger had a breakaway on Torchia that he slid by his right pad to tie the game, 2-2.

Some post-whistle roughhousing led to a four-minute Rangers powerplay at 19:11.

With just 12-seconds left in the second frame, a shot by Ville Ottavainen was deflected by Reid Valade and into the back of the net to give the Rangers back their lead, 3-2.

Declan McDonnell also picked up an assist on the goal.

Barrie took a high-sticking penalty just 33 seconds into the third period and that gave the Rangers a 5-on-3 advantage.

On the powerplay, Valade passed to Donovan Sebrango who found Ville Ottavainen with a crisp pass that the Finnish defender fired past Lalama to double the Rangers lead, 4-2.

At 4:24, the Colts brought themselves within one on Foerster’s hat trick goal. It was 4-3.

After sustained pressure in the Rangers end, the Colts were able to tie it up on a goal by their captain, Jason Willms. It was 4-4 at 6:23.

Barrie’s Vinny Prospal took a slashing penalty at 7:58 to put Kitchener on the powerplay.

On the powerplay, Ottavainen uncorked a one-timer for his second goal of the night. The go-ahead goal was scored at 8:29 and it was 5-4.

At 9:47, Riley Piercey scored his first goal of the preseason for the Colts and once again, it was knotted up. 5-5.

The Rangers retook the lead at 16:04 when Mike Petizian, from the side of the net on the red line, banked a shot off the leg of Lalama to make it 6-5.

Kitchener hung onto the lead to earn a win in their last home preseason game.