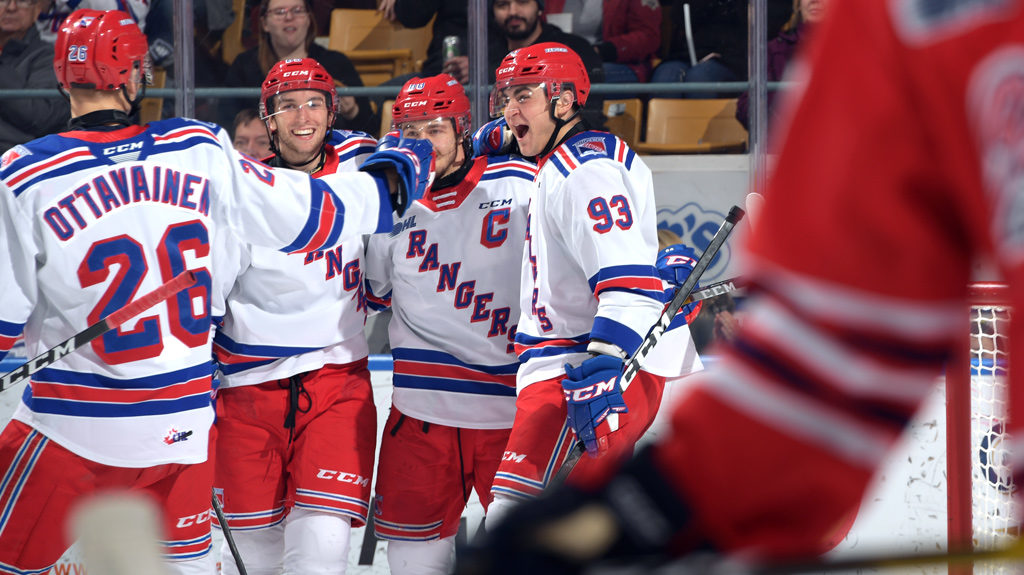 Despite having just played 24 hours earlier, the Rangers came out the more energized of the two squads and went out front 3-0 after just six minutes into the game.

Ryan Stepien (6) opened the scoring at 1:38 on a second-chance opportunity to the right of Oshawa starting goaltender Zachary Paputsakis. Greg Meireles and Michael Vukojevic picked-up the assists on the opening tally.

After killing-off an Oshawa power-play (due to Arber Xhekaj’s instigator penalty from a fight with Daniel Walker), Jonathan Yantsis was sprung on a partial breakaway coming out of the box after serving the infraction. His initial shot was stopped but he slammed home the rebound to make it 2-0 at the 4:40 mark.

Axel Bergkvist and Lucas Pfeil got the assists.

Reid Valade made it 3-0 just 1:36 after that, with help from Ville Ottavainen and Vukojevic (2).

The next 9:24 though saw the Generals come all the way back to tie the game at 3-3 thanks to a pair of goals from captain Kyle MacLean that book-ended one from Nico Gross.

Kitchener had its two-goal lead restored at the midpoint of the second period when Riley Damiani (11) beat Paputsakis with a quick wrist shot from just inside the face-off dot. Vukojevic picked up the lone assist.

Yantsis notched his second goal of the game on the power-play at 16:05, after pushing a puck rolling through the crease into the back of the net. Stepien and Ottavainen (2) got credit for the assists.

Despite a William Ennis short-handed goal late in the third period to get the Generals back within one, Greg Meireles secured the victory with an empty-netter. The goal was even more significant because, with his fourth assist of the night, Vukojevic set a new career-high for points in a game.

The Rangers will head to Owen Sound on Saturday night to complete their “three games in three days” weekend. Puck drop is set for 7:30pm.

Kitchener’s next home game is the 25th Teddy Bear Toss on Tuesday December 10th against the London Knights. Game time is 7pm.

all news Alumni
A doctor’s journey from East Ave. to the West Coast
3 days ago