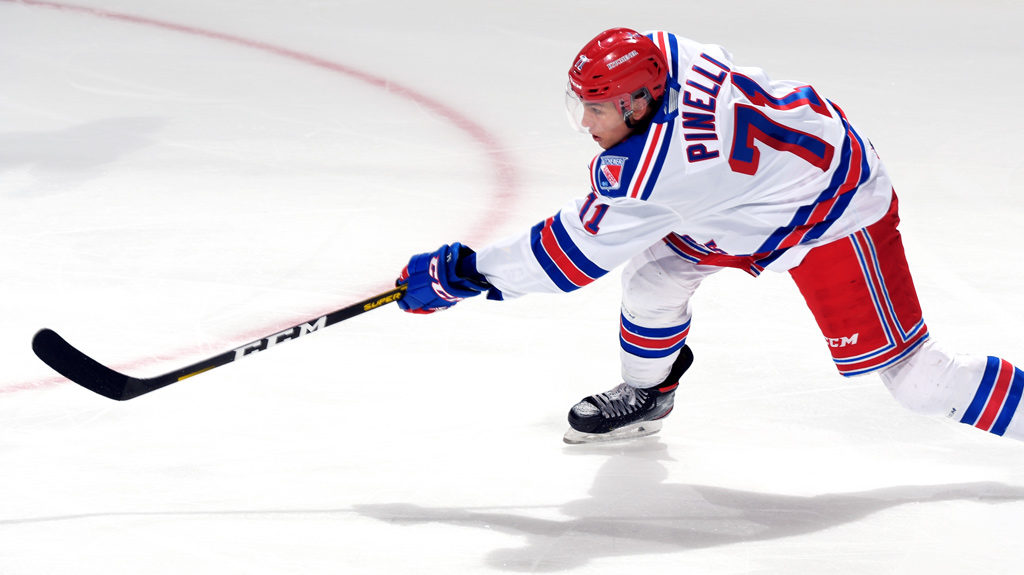 Jonathan Yantsis led the way with a pair of goals. Francesco Pinelli, Mike Petizian, Declan McDonnell, and Greg Meireles all chipped in in the offensive onslaught.

Jacob Ingham had a terrific game stopping 35 in the win.

The Otters Maxim Golod took a hooking penalty at 10:34 of the first period. On the ensuing powerplay, with just four seconds remaining, Francesco Pinelli (11) uncorked a wrist shot high, blocker-side past Aidan Campbell to make it 1-0.

Michael Vukojevic earned an assist on the opening goal.

With 22 seconds left in the period, Liam Hawel deked around an Erie defenseman and passed to Mike Petizian (6) down low who snuck one past Campbell to make it 2-0.

Just 49-seconds into the second period, Erie’s Brendan Hoffmann (6) was alone going into the slot and Daniel D’Amato found the right-winger to make it 2-1.

At 10:59, the Rangers restored their two-goal advantage when Reid Valade passed to Jonathan Yantsis in the far faceoff circle. Yantsis (22) one-timed it into the back of the net to make it was 3-1.

Axel Bergkvist also picked up an assist on the goal, his eighth straight game with at least a point.

With 25 seconds to go in the period, Pinelli, streaking down the left side, passed cross-ice to Declan McDonnell (8) who tapped it in to extend the lead to three, 4-1.

At 7:50, Yantsis (23) scored his second of the night on a nifty move around a defender and goaltender Campbell to make it 5-1.

While shorthanded, Greg Meireles and Riley Damiani were on a two-on-one break. Meireles (14) elected to shoot the puck and wired it past Campbell and it was 6-1.

Final shots on goal were 36-35 in favour of the Otters.

The next Rangers home game is on Friday, January 3 versus the Saginaw Spirit at 7:30 pm. The next road game for the Rangers is on Saturday, January 4 at 7:00 pm versus the Niagara IceDogs.