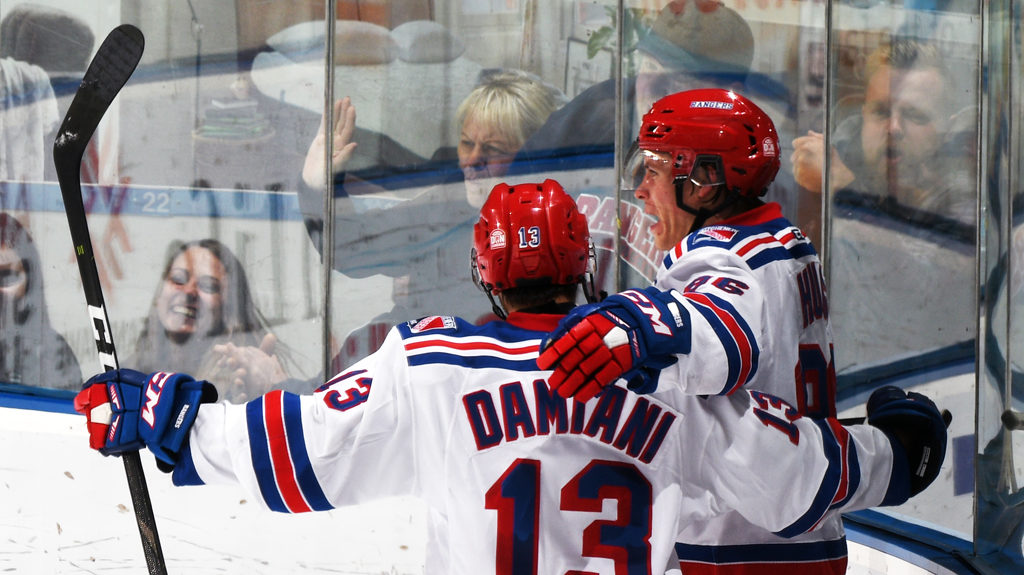 Riley Damiani led the charge for the Rangers scoring a hat trick to bring his season goal total to 29. Joseph Garreffa scored 1G 2A and Greg Meireles registered 2A to extend their point streaks to 13 and 18 games respectively.

Luke Richardson, the game’s second star, stopped 36 in the win.

Erie’s netminder, Cole Ceci, took a penalty at 7:19 of the first period when he came out of his net, dove, and tripped up Michael Vukojevic. On the ensuing powerplay, some crisp, quick passing by the Rangers led to Riley Damiani’s 27th goal of the season at 8:35 to make it 1-0.

Joseph Garreffa and Rickard Hugg assisted on the goal, which meant that Garreffa’s point streak was extended to 13 games.

Shortly after, at 9:13, a shot from the point Brendan Sellan was tipped by Jack Duff and past Luke Richardson to tie the game up, 1-1.

The rest of the period featured some back-and-forth play that produced some quality opportunities for both sides, but both goaltenders kept it deadlocked at one apiece.

The Rangers outshot the Otters 13-6.

It took until 15:31 of the second period to have a change on the scoreboard. On a scramble in front of Richardson, the puck ended up on the stick of Mathew MacDougall who had a wide open net in front of him and left-winger scored his 16th to give the Otters their first lead, 2-1.

Just 31 seconds later, on assists from Hugg and Cole Cameron, Damiani had his initial chance in-close on Ceci stopped but the Mississauga native made good on his second chance and scored his second goal of the night and 28th of the year to make it 2-2 going into the second intermission.

The Rangers maintained a slight lead in shots, 25-24.

Kitchener came out firing to start the third period and again it was a string of quality passes that led to Garreffa firing home his 31st of the season on assists by Joseph Rupoli and Greg Meireles to make it 3-2 at 1:57.

The assist for Meireles extended his point streak to 18 games.

Meireles playmaking continued when he was on the boards behind Ceci and passed the puck out front to Alexey Lipanov who netted his 10th of the year to make it 4-2 at 12:54.

At 16:50 of the third period, with Richardson sprawled on the ice after a flurry of opportunities, Gera Poddubnyi scored his 28th to bring the Otters within one, 4-3.

That’s as close as Erie would get, however. Two empty net goals, one by Damiani that earned him his hat trick at 18:44 on assists by Hugg and Cameron, and another by Yantsis, his 46th, at 19:35 sealed the deal for the visitors who won 6-3.