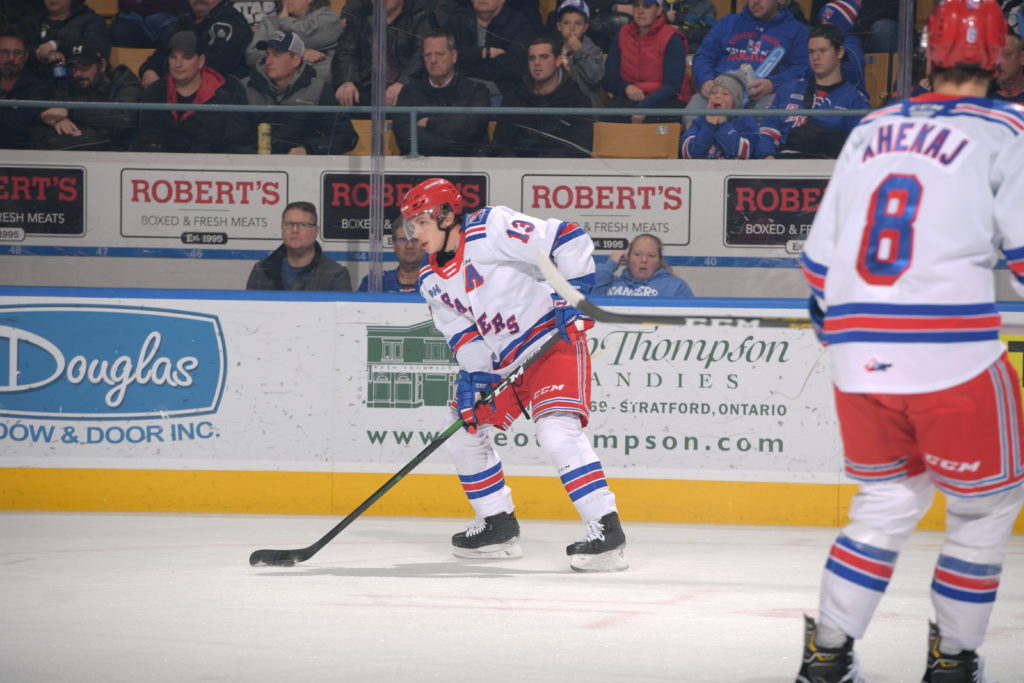 Graham Dickerson took a holding penalty at 3:17 of the first period. On the ensuing power-play, Logan Morrison (22) fired a slap shot from the face-off dot to Lucas Pfeil’s left and it went top corner short-side to make it 1-0.

The Rangers struck back at 7:27 when Isaac Langdon won a face-off and sent the puck to Arber Xhekaj (5) who put a puck on net from near the boards at the blue line and it beat Zachary Roy to tie it up 1-1.

At 7:51 a Rangers turnover at the blue line led to Tag Bertuzzi (21) scoring from inside the face-off circle to restore the Bulldogs lead, 2-1.

A short time later, at 8:23, another defensive-zone turnover resulted in Arthur Kaliyev (40) scoring from a position similar to Bertuzzi’s to make it 3-1.

It was at this point that Jacob Ingham replaced Lucas Pfeil in net.

At 15:12, an attempt on net by Justin MacPherson hit Declan McDonnell (18) who collected the puck, spun around, and fired it into the net to bring the Rangers within one, 3-2.

Liam Hawel also picked up an assist on the goal.

Hamilton scored their fourth goal of the period at 16:29 when Tag Bertuzzi (22) broke into the Rangers defensive zone on a two-on-one and made a move around Ingham to make it 4-2.

At 4:11, Kande Landry drifted across the slot and passed back to Isaac Nurse (13) who tipped the puck past Ingham from inside the crease to make it 5-2.

Arthur Kaliyev (41) scored his second of the night while Hamilton was on the power-play. The New York native wristed a high shot from inside the face-off circle that beat Ingham and that made it 6-2.

The Bulldogs took a tripping penalty at 14:14. While on the power-play, Serron Noel passed the puck into the high slot to Francesco Pinelli (16) who went five-hole to bring the Rangers within three, 6-3.

Michael Vukojevic also had an assist on the goal.

Kitchener pulled within two goals when Noel (16) stripped the puck from a Bulldogs player, got on a breakaway, and scored shorthanded to make it 6-4.

A short time later, a giveaway by Roy behind his net was gifted to Liam Hawel (18) who tapped it in to make it a one-goal game, 6-5.

The Rangers evened it up at six apiece on a goal by Hawel (19).

With just under four minutes remaining in regulation, four Rangers broke into the Hamilton defensive zone against just two Bulldogs. Donovan Sebrango passed to Riley Damiani who fired it into the net from above the slot to give the Rangers their first lead of the game, 7-6.

Final shots on goal were 40-31 for the Rangers.

The next Rangers home game is on Friday February 21st at 7:30 pm versus the Erie Otters. Their next road game is on Saturday February 22nd at 7:00 pm against the Flint Firebirds. 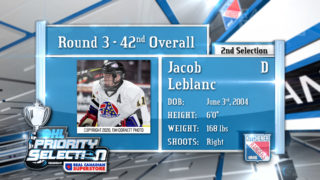