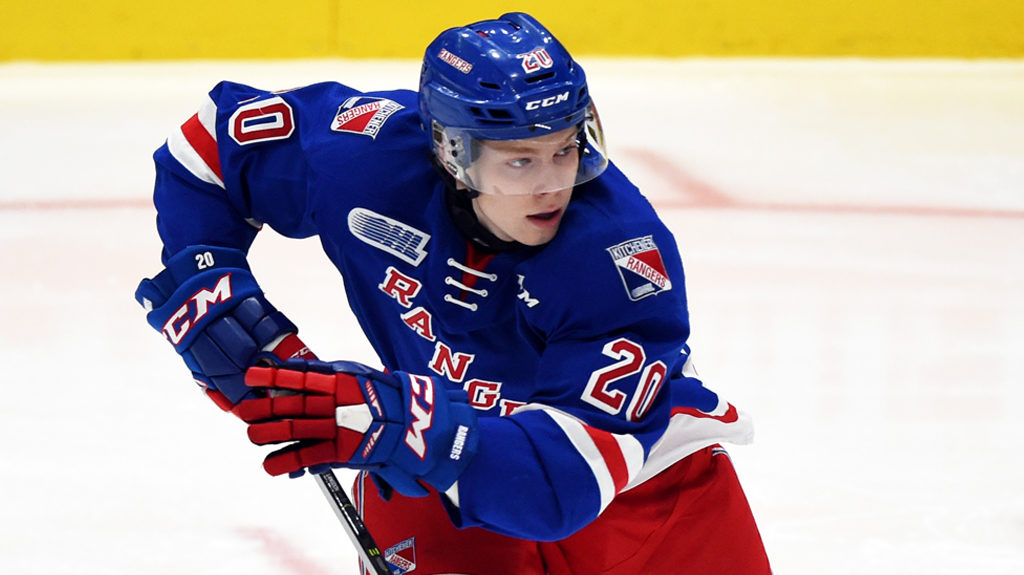 Flint, MI.: It was a rout for the Rangers in Flint on Wednesday night as the Boys in Blue won 7-2.

Greg Meireles led the way for Kitchener with one goal and three assists, while Nick McHugh scored two goals and picked up one helper. Another notable highlight was Isaac Langdon’s first goal of the season.

Despite playing at home last night and having to drive to Flint for a game Wednesday night, the Rangers couldn’t have asked for a better start to their contest with Firebirds.

2:59 into the first period, the Rangers stripped the Firebirds of the puck in the defensive zone, which led to a two-on-none breakaway that resulted in Nick McHugh’s fourth goal of the season. Mike Petizian picked up an assist on the opening goal.

Shortly after, the Rangers won a draw that ended up on the stick of Kitchener’s point leader, Rickard Hugg, who didn’t miss the opportunity to bury his 13th goal of the season. Greg Meireles earned an assist on the goal at 4:05.

Besides three penalties, two to Flint, and one to Kitchener, the first didn’t see any more action on the scoreboard.

38-seconds into the second period, Jonathan Yantsis found the back of the net to put the Rangers comfortably up 3-0 on his team-leading 20th goal of the season. Meireles and Hugg were the assists on the milestone goal.

At 8:08, Flint’s Jake Durham took a cross-checking penalty and 19 seconds into the powerplay, Hugg tipped in his second of the night on a shot from Garreffa at the blue line. Meireles also picked up an assist, his third of the night, and the Rangers led 4-0.

Justin MacPherson took a tripping penalty at 15:11 of the second period, and at 16:00, Jake Durham scored his 12th goal of the season after a Riley McCourt shot from the point went off a Rangers defender and right onto the stick of Durham. Michael Bianconi also got an assist on the goal that made it 4-1.

Kitchener restored their four-goal lead at 18:00 on McHugh’s second goal of the night and Garreffa’s second assist of the night, 5-1.

At 11:50 of the third and final period, Meireles picked up his fourth point of the night on his first goal of the night to put the Rangers up 6-1. Justin MacPherson earned an assist on the goal.

Then, at 15:32, Isaac Langdon, on a cross-crease pass by McHugh, scored his first goal of the season to put the Rangers up 7-1. Garreffa also assisted on the goal.

18:26 into the third, Durham scored his second powerplay goal of the game to make it 7-2 and that’s how the game would end.

The Rangers next home game on Friday, November 23 at 7:30 pm versus the Erie Otters. The next road game for Kitchener is on Sunday, December 2 at 2:00 pm vs the Guelph Storm