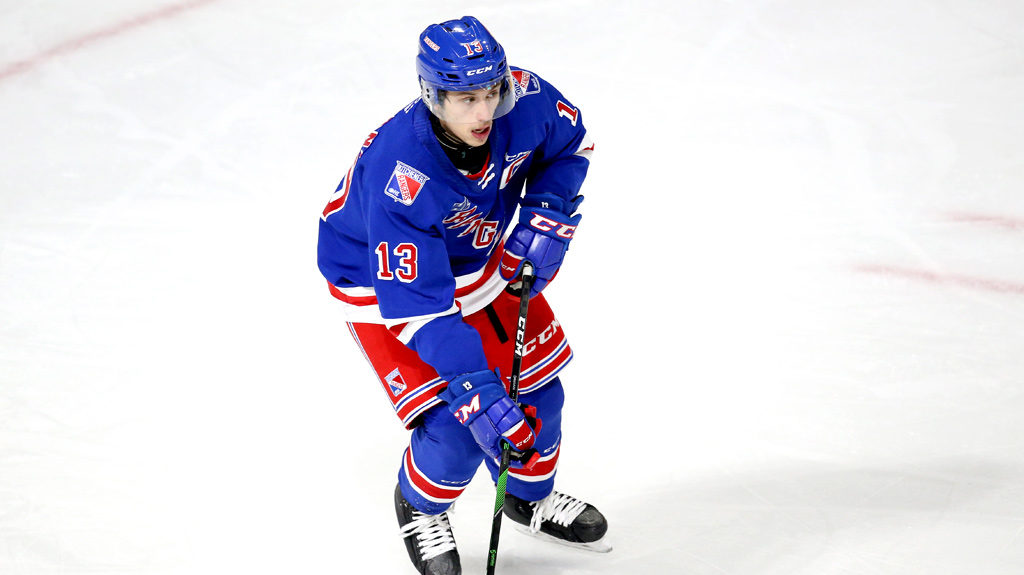 Riley Damiani and Jonathan Yantsis scored two apiece and Greg Meireles, Arber Xhekaj and Mike Petizian each scored goals of their own in the victory.

Jacob Ingham, despite giving up two goals on two shots to start the game, was perfect the rest of the way through, stopping 22 for his 14th win of the season.

The Knights opened up the scoring early in the first period. At 1:43 a shot from just in front of the blue line by Luke Evangelista was tipped by Matvey Guskov (7) to put the home side up 1-0.

At 6:25 London extended their lead when a turnover led to Cole Tymkin passing to Billy Moskal (5) from behind the net and the centreman wristed one high to make it 2-0 on two shots.

Coly Tymkin took a match penalty for a blindside hit to the head on Isaac Langdon at 10:20. Immediately after the hit, Arber Xhekaj fought Tymkin and received a 10-minute misconduct for the altercation.

The period would end with momentum heavily favouring the Rangers who led in shots 10-3 but remained down by two goals.

Kitchener got on the board at 3:34 of the second period. While on the powerplay — a tripping penalty drawn by Liam Hawel — Jonathan Yantsis passed the puck across the top of the crease and Riley Damiani (14) tipped it in to cut the lead in half, 2-1.

Axel Bergkvist also earned an assist on the goal.

With Sebrango in the box for a well-timed hook on Alex Regula who was on a partial break, Damiani (15) found himself on a breakaway of his own coming across neutral ice. The centreman went right and slid the puck left to beat Brett Bochu and tie the game, 2-2.

Mike Petizian picked up an assist on Damiani’s second of the night.

At 11:37, the Rangers took their first lead of the game. Just as a powerplay expired, Jonathan Yantsis (20) caught Bochu out of position and executed a wraparound goal to make it 3-2.

Greg Meireles and Liam Hawel got on the scoresheet on the third goal.

On the Rangers fourth powerplay of the night, Yantsis (21) tipped a shot by Damiani past Bochu and the Rangers scored their fourth unanswered to make it 4-2.

Bergkvist got his second assist of the night on the goal.

At 18:26 Reid Valade shot the puck high over the net and off the glass. As the puck came back towards the net, Greg Meireles batted it into the back of the net and put the Rangers up 5-2.

28-seconds later, Xhekaj unloaded a blast from just in front of the blue line that capped off a six-goal second period for the Blueshirts.

Kitchener extended their lead to five goals after a Knights turnover deep in their own end led to Hawel finding Mike Petizian (5) who shot one past a sprawling Dylan Myskiw to make it 7-2.

There were 10 penalties in the 3rd period and a number of fights but the scoreline stayed the same after 60 minutes.

The Rangers outshot the Knights 30-24 in the win.