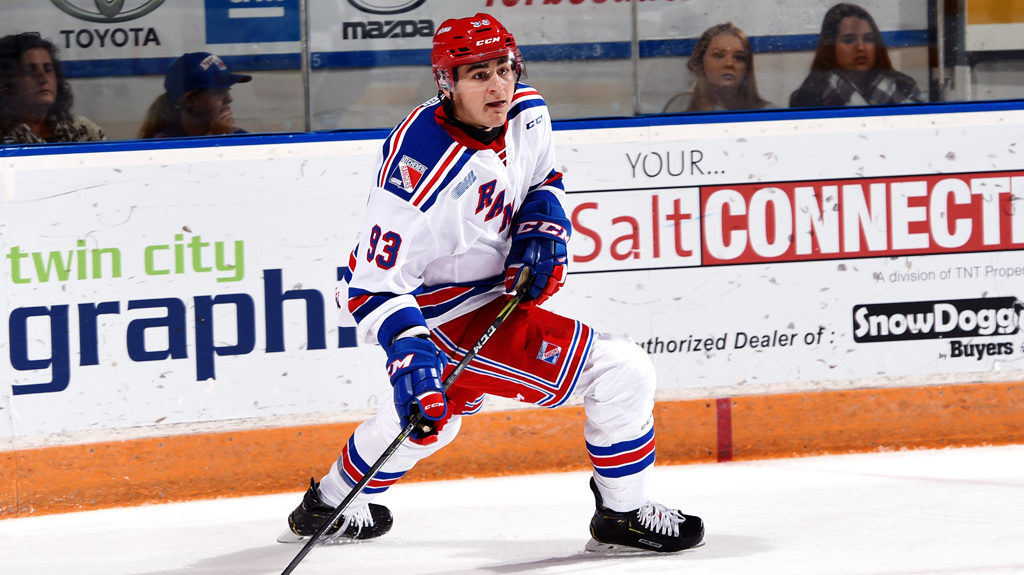 Kitchener, ON: The Rangers’ last game of the Preseason Showcase was a match-up with the Peterborough Petes at The Aud on Sunday afternoon.

Jonathan Yantsis carried the Rangers with a hat-trick to bring his Preseason Showcase goals total to five. Graham Dickerson, Riley Damiani, and Declan McDonnell all contributed with goals. McDonnell’s goal came with just six seconds left in the game.

Damiani scored the only goal of the shootout to give the Rangers the 7-6 win.

Jacob Ingham, in his first start for Kitchener, saved 18 as the Rangers out-shot the Petes 53-24.

After a flurry of chances to start the game, the Rangers finally found a way past Petes goaltender Michael Simpson at 8:44 when a rebound ended-up finding Jonathan Yantsis on the goalkeeper’s glove-side and he slid home his third of the Showcase to make it 1-0.

The Rangers extended their lead at 10:30 when another big rebound ended up on the stick of a Ranger. This time it was Graham Dickerson who put it away to make it 2-0.

At 12:15, Max Grondin got the Petes on the board when he beat Jacob Ingham from the slot to make it 2-1.

Peterborough evened up the game at 16:27 when Curtis Trolley, from just inside the face-off circle, wristed a shot over the glove of Ingham and it was 2-2.

Before the first period ended, with 10 seconds left, Chad Denault was gifted a rebound and a wide-open net in front of him and the right-winger made good on the opportunity to give the Petes the lead, 3-2.

At 2:01 of the second period, Riley Damiani scores his second of the preseason with heavy traffic in front of Simpson. It was 3-3.

Peterborough retook the lead at 4:49 with a goal off a rebound by Cameron Butler. His fourth made it 4-3.

The period saw the Rangers get another 16 shots to lead overall 39-19.

Kitchener responded in-kind just 29 seconds later when Yantsis netted his second of the game to bring the Rangers within one, 5-4.

While on a 5-on-3 power play, it was none other than Yantsis who was the benefactor of some solid passing and at 7:00, number 93 had his hat-trick and the game was knotted up 5-5.

With Yantsis in the box serving a too many men on the ice penalty, Mason McTavish gave Peterborough their lead back when he fired a shot past Ingham, blocker-side, to make it 6-5.

At 19:54 with the Rangers net empty, Declan McDonnell scored his first of the preseason to tie it up, 6-6.

The game proceeded straight to a shootout and the only goalscorer was Damiani who gave Kitchener the win, 7-6.

The Rangers next home game (preseason) is September 13 at 7:30 pm versus the Barrie Colts.

Finally, don’t miss Game 3 of the 2019 CIBC Canada Russia Series on Thursday November 7th when the series shifts to Ontario and is hosted by the Kitchener Rangers! Tickets on sale this Tuesday September 3 at 10:00 am. Click here for details.