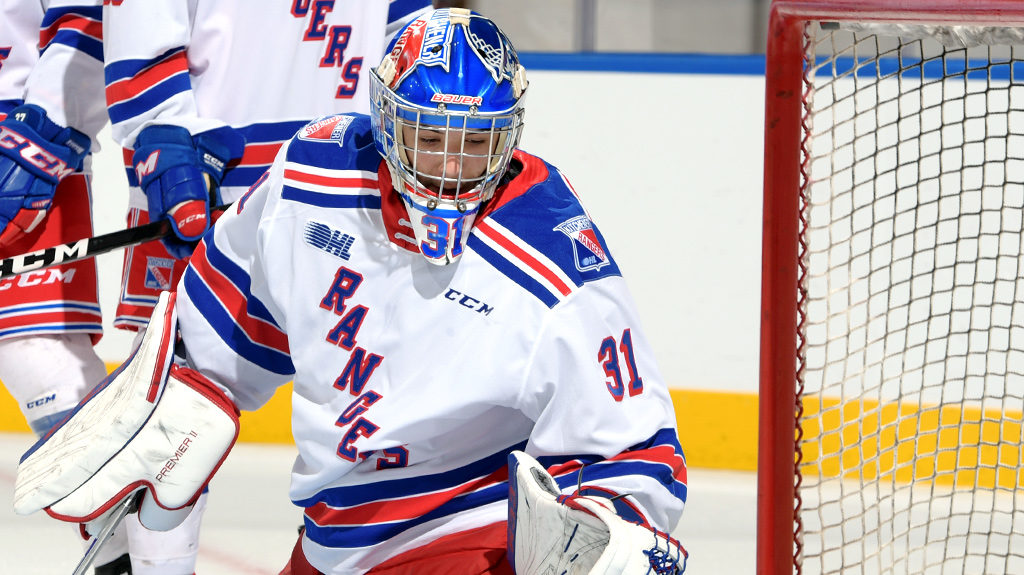 To add to his hat trick on Friday night, Declan McDonnell scored twice in the win. Greg Meireles also scored twice while Jonathan Yantsis, Axel Bergkvist, and Liam Hawel also added goals of their own in the win.

Kitchener struck first while on the powerplay. At 17:22 Riley Damiani passed down low to the side of the crease where Jonathan Yantsis (34) tapped it in to make it 1-0.

Greg Meireles also picked up an assist on the opening goal.

Moments later, at 18:40, Damiani passed to Liam Hawel who in the faceoff circle who then passed cross-ice to Axel Bergkvist (8) who one-timed it into a wide-open Sting net and it was 2-0.

Shots at the end of the opening 20 minutes were in favour of the Rangers, 19-7.

The Rangers extended their lead at 6:37. Francesco Pinelli broke into the offensive zone, made a move around a Sting defender and it to Declan McDonnell (16) who netted his fourth of the weekend to make it 3-0.

At 11:54, Greg Meireles took a shot on Ethan Langevin that was initially stopped. The rebound came back to Meireles who went to his backhand and scored to extend the Rangers lead to 4-0.

Kitchener extended their lead early in the third period at 1:25 when a shot from just in front of the blue line by Ville Ottavainen was tipped at the face-off dot by Meireles (26) and redirected into the back of the net. That extended the lead to 5-0.

At 3:19, Hawel’s shot on net went off Langevin then a Sting defender and into the back of the net. Those lucky bounces make it 6-0.

McDonnell (17) scored his second of the night to make it 7-0 at 9:14 with assists going to Mike Petizian and Joseph Serpa.

The final shots on goal were 48-28 in favour of the Rangers.

The next Rangers home game is on Tuesday February 11th at 7 pm versus the Erie Otters. The next road game for the Rangers is on Friday February 14 at 7:30 pm against the London Knights.