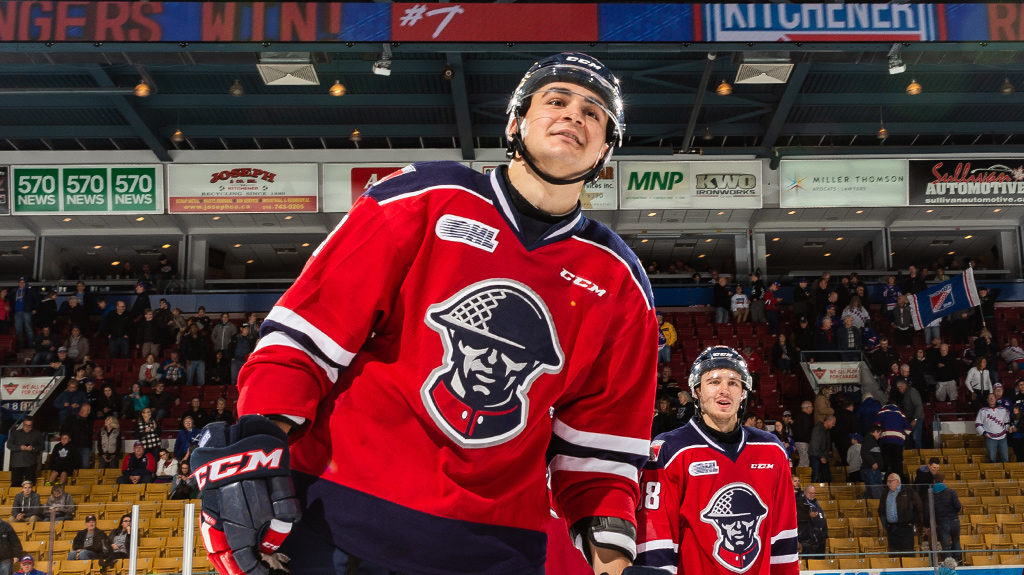 Jacob Ingham stopped 34 in the win.

It was the Rangers who struck first. An attempt on the net by Reid Valade was poke checked by the Sting goalie Ethan Langevin and the puck went right to Jonathan Yantsis (32) on the doorstep who made good on the opportunity to put the Rangers up 1-0 at 4:07.

Riley Damiani earned the second assist on the goal that gave him his 200th OHL point.

Greg Meireles picked up an assist on the goal.

The Sting got one back at 11:12 when Ryan McGregor (18) put a puck through the crease that went off a Rangers defender and past Jacob Ingham to make it 2-1.

Kitchener scored a flurry of goals in a hurry three-quarters of the way through the first period. First was Reid Valade (15) at 14:20 to make it 3-1 at 14:54. Then it was Hawel linked up with Donovan Sebrango (4) who sniped it high, blocker-side to make it 4-1. And finally, Holden Wale (4) from Declan McDonnell and Mike Petizian netted his first as a Ranger at 15:16 to make it 5-1.

The opening period ended with the Sting ahead in shots 15-12.

The Rangers extended their lead at 7:32 of the second period when Damiani broke into the offensive zone, passed cross-ice to Yantsis, who then dished it back to Valade (16) for a tip-in on his second of the night to make it 6-1.

The Rangers extended their lead at 1:26 of the third period when Francesco Pinelli passed out from behind the net to Mike Petizian (13) who one-timed it into the net to make it 7-2.

Sarnia got a goal back at 9:27 on a delayed penalty when Eric Hjorth beat Ingham to make it 7-3.

The final shots on goal were 38-35 in favour of the Sting.

1:14
andreas karlsson rangers vision
RANGERS VISION: This or That - Andreas Karlsson
57 mins ago