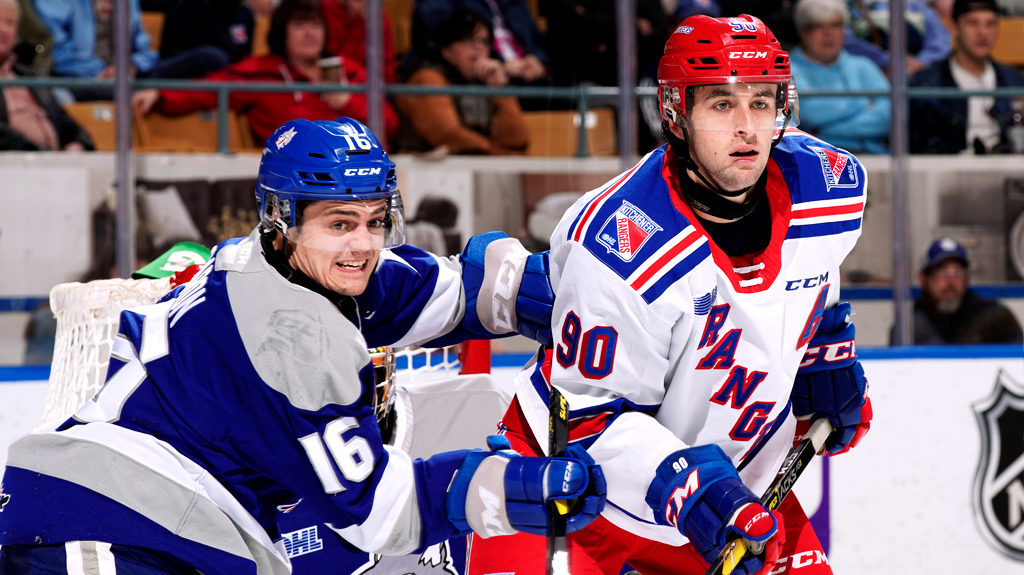 Kitchener, ON: The Sudbury Wolves (6-4-0-0) were at The Aud on Monday to play the Rangers (5-1-1-2) for the one and only look East Avenue faithful will have at the Eastern Conference contenders this season.

The Rangers opened up the game with three goals on three shots and from there, they were able to hang onto the lead for the remainder of the game. Going into the third period, it was 4-3 when Kitchener exploded for another three goals in under five minutes to win 7-3.

Liam Hawel scored a hat trick while Mike Petizian, Ryan Stepien, Ville Ottavainen, and Greg Meireles all chipped in with goals as well.

Jacob Ingham saved 39 in the win.

It took just 37-seconds for the Rangers to get on the board. Liam Hawel (3) was the benefactor of a neutral ice turnover by the Wolves and the left-winger shot a puck five-hole on Mitchell Weeks that snuck through into the back of the net and it was 1-0.

Moments later, at 1:47, off another Wolves turnover, Reid Valade found Mike Petizian (2) who extended the lead on the second shot of the game to make it 2-0 for the Rangers.

Just two shots into the game, Mitchell Weeks was pulled in favour of Christian Purboo.

The goalie change didn’t initially aid Sudbury because 2:48, off another turnover, the Rangers third shot brought their third goal. Once again, it was Hawel (4), on an assist from Declan McDonnel, who make it 3-0.

Sudbury got on the board at 5:56 on an outside shot from Owen Gilhula (5) beat Jacob Ingham to make it 3-1.

At 11:47, off a Rangers turnover, the Wolves pulled to within one when Blake Murray (5) wristed one past Ingham on their 14th shot of the period to make it 3-2.

Kitchener got a goal back at 16:48 when some nice up-ice passing by Donovan Sebrango and Ville Ottavainen led to a Ryan Stepien (4) goal high on Purboo. 4-2.

Sudbury clawed back at 17:26 when a puck shot in front of the crease bounced off a referee’s skate and onto the stick of Chase Stillman (5) who came out from behind the net to slide it past Ingham’s pad to make it 4-3.

The first period would end with the Wolves ahead in shots, 23-8.

For as much action as there was in the first period, there was equally as little action in a second period that featured no goals, a single penalty to Sudbury, and 13 shots apiece.

Kitchener had an explosive start to the third period scoring three goals in the first five minutes of the frame.

First, at 1:10, was Ville Ottavainen who wristed home his first OHL goal from beside the faceoff dot to Purboo’s left. That made it 5-3.

The goal was assisted by Franceso Pinelli and Michael Vukojevic.

Pinelli and Ottavainen earned assists on the goal.

Liam Hawel (5) completed the second hat trick of his OHL career at 4:23 on assists from Vukojevic and Ottavainen and it was 7-3.

After that goal, Sudbury pulled Purboo in favour of Weeks who started the game.

The game would end with the Rangers winning by a four-goal margin despite being outshot 42-31.