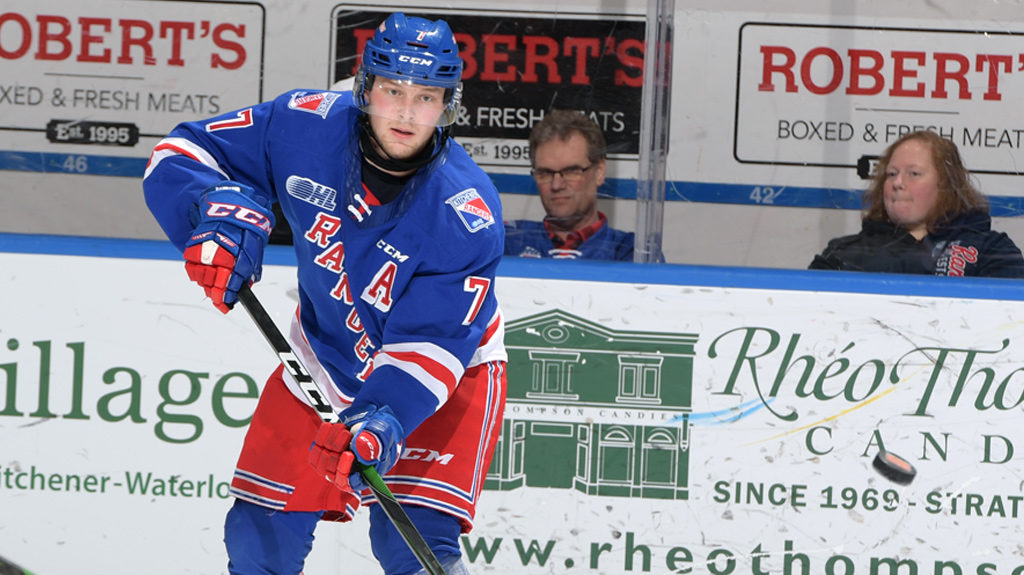 The Rangers got onto the scoreboard first at 7:04 when Francesco Pinelli (14) broke in on the right wing, fired on net, collected his own rebound and tapped it by Joe Vrbetic to make it 1-0.

Declan McDonnell picked up an assist on the opening goal.

Just over two minutes later, at 9:06, the Rangers extended their lead when Axel Bergkvist and Justin MacPherson cycled the puck to the blue line to Liam Hawel (11) who uncorked a slap shot that beat a screen Vrbetic. It was 2-0.

At 14:24, Jonathan Yantsis took a holding penalty. On the ensuing penalty kill, Greg Meireles (19) stripped the puck from a Battalion defender and got himself on a one-on-one going into North Bay’s end. The centreman buried it short side and high to make it 3-0.

At 6:01, Kitchener added another when a thread-the-needle pass across the top of the crease from Hawel found Meireles (20) who tapped in his second of the game to make it 4-0.

Serron Noel picked up an assist on the goal, his first point as a Ranger.

The Rangers added to their lead a short time later, at 7:08, when Riley Damiani (18) fired a wrist shot from the top of the slot to make it 5-0.

Jonathan Yantsis and Simon Motew both picked up assists on the goal.

North Bay got on the board at 13:19 on a Luke Moncada (21) shot from the high slot that deflected off Lucas Pfeil’s blocker and in. That made it 5-1.

The Rangers restored their five-goal lead at 17:20 when a backhand pass by Reid Valade to Damiani (19) led to the captain’s second goal of the night and it was 6-1.

Ville Ottavainen was the second assist on the goal.

Second period scoring wasn’t over for the Rangers. Declan McDonnell (9) tipped and redirected an outside shot by MacPherson to join the scoring and make it 7-1.

Axel Bergkvist earned his second assist of the night on the goal.

McDonnell (10) picked up his second goal of the night at 0:57 when he beat Cameron Lamour who had replaced Verbetic to start the period. It was 8-1

Bergkvist earned another assist on the goal.

At 12:51, Axel Bergkvist, from the faceoff dot, fired the puck perfectly between the post and the crossbar to make it 9-1.

Joseph Serpa picked up an assist on the goal.

Josh Currie scored a goal with 12 seconds remaining in the game to make it 9-2 and that’s how the game would end.

Final shots on goal were 42-23 for the Rangers.

1:14
andreas karlsson rangers vision
RANGERS VISION: This or That - Andreas Karlsson
58 mins ago