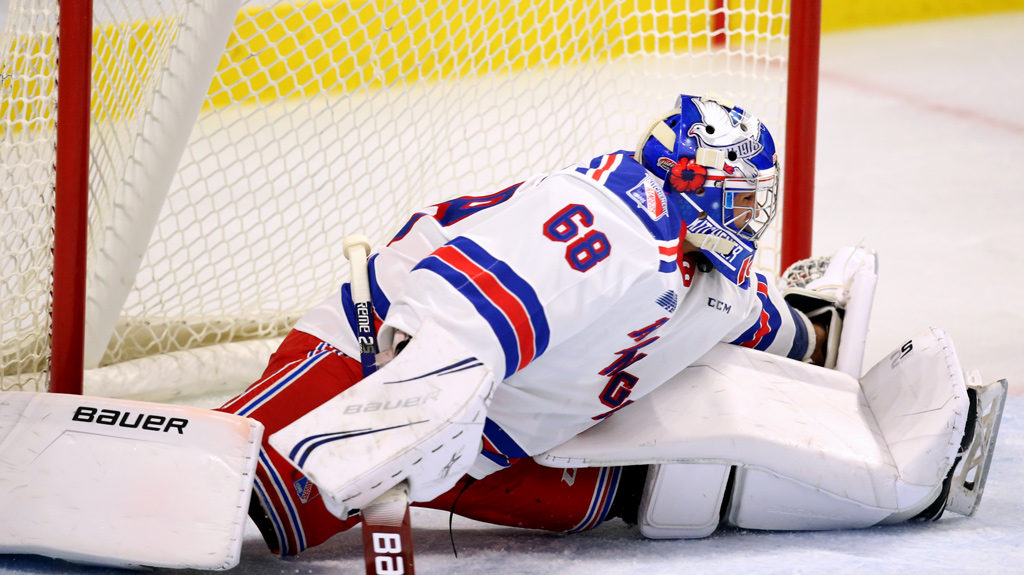 Kitchener was up 3-1 at 5:50 of the third period on goals from Liam Hawel, Jonathan Yantsis, and Ryan Stepien. Two goals off faceoffs for the Attack, including one with just 53 seconds left in the third, tied the game up 3-3 at the end of regulation.

Overtime solved nothing and in the shootout, Aidan Dudas, the Attack’s fifth shooter, won it for the home team, 4-3.

Jacob Ingham, the games second star, saved 43 in the loss.

Just as a 5-on-3 powerplay was expiring for the Rangers, Aidan Dudas found himself on a breakaway. Dudas (3) shot the puck, it rebounded high off the endboard, bounced onto the top of Jacob Ingham’s net and then into the back of the goalkeeper and, finally, into the net.

Kitchener almost immediately took two penalties to begin the period which gave the Rangers their second two-man advantage of the game.

Unfortunately for the Blueshirts, they couldn’t find a way to get the puck past Mack Guzda.

Just as the second penalty expired, the Attack found themselves on a breakaway similar to their last at the end of the first two-man advantage.

Fortunately for the Rangers, Ingham came up with a big stop to keep the game at 1-0.

The Rangers got on the board late in the second period, at 16:35, when they broke into the Attack’s defensive zone on a three-on-one. Liam Hawel (1), on an attempted cross-ice pass, had the puck go off the diving defenders stick and through the five-hole of Guzda to tie the game up, 1-1.

The goal was Hawel’s first as a Ranger.

When the horn went at the end of the second period, the Attack led in shots, 25-20.

Kitchener broke the deadlock and took their first lead of the game at 1:48 of the third period. A second chance effort by Jonathan Yantsis (6) beat Guzda high to make the score 2-1.

Francesco Pinelli and Greg Meireles both earned assists on the go-ahead goal.

At 5:50, Ryan Stepien (3) came across the blueline and wristed a hard shot over the shoulder of Guzda and into the back of the net to extend the Rangers lead, 3-1.

The two-goal lead for the Rangers didn’t last long. At 6:08, Joshua Samanski cleanly won a faceoff in the Rangers defensive zone. Kirill Nizhnikov (4) immediately uncorked a shot through heavy traffic and into the top corner of the net to make it 3-2.

With just 53 seconds remaining and the Attack net empty, the Attack won the faceoff in the Rangers end. The puck was cycled to the blueline to Sergey Popov (3) who fired a shot through traffic and past Ingham to tie it up, 3-3.

The shots at the end of regulation were 42-26 for the Attack.

The three-on-three overtime solved nothing and in a shootout, Dudas won it for the Attack on the fifth shot to seal the deal for the home team, 4-3.

Final shots were 46-29 for Owen Sound