First home win in the books after Rangers down Otters 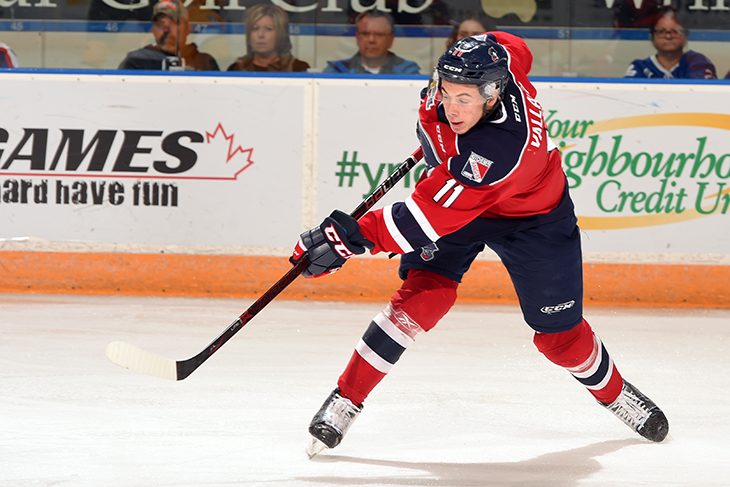 Things went from spectacular to uncomfortable during a three-minute span in the third period for the Kitchener Rangers.

The game appeared to be a no-doubter for the Rangers, who were reaping the benefits of a fine effort and disciplined play to lead 4-0 with just ten minutes left to play in the game.

But then came Patrick Fellows who put a damper on the crowd, ruining the shutout bid of Anthony Dumont-Bouchard at 50:08.

And then Kyle Maksimovich scored to cut the Kitchener lead in half, 4-2, with 6:53 to play in the game.

Then Joseph Mack scored again for Erie just 31 seconds later. It was a 4-3 game, and Rangers fans weren’t sure what to make of what they’d just seen unfold.

But the solid performance of Dumont-Bouchard didn’t go to waste, as Garreffa answered back for the Blueshirts to secure the pair of points for the Rangers. The goaltender earned his fourth win of the season, maintaining an untarnished record of 4-0-0-0 since coming to Kitchener, tonight making 30 saves.

His counterpart to start the game was Troy Timpano (1-3-1-0), who took the loss after surrendering four goals on 12 shots. He was then pulled in favour of Anand Oberoi who allowed one goal on 16 shots.

Jake Henderson got the Rangers on the board just past the midway point of the first period, assisted by Connor Bunnaman and Logan Stanley at 12:48.

With the goal (and assist to follow), Henderson now rides a five-game point streak (3G, 3A) for the first time in his OHL career.

The Blueshirts went up 2-0 with under two minutes to play in the opening frame, as Riley Damiani registered the first shorthanded goal of his career, assisted by Henderson. Damiani broke up an Erie pass at the blue line and skated around another defender before beating Timpano with just 23 seconds remaining in the Kitchener penalty.

The Rangers would take the 2-0 lead into the first intermission, trailing the Otters in shots 10-8.

Kitchener wasted little time etching the scoresheet once again in the second period, as Adam Mascherin tallied his team-leading fourth goal of the season just 1:14 in to extend the lead to 3-0. After a Kyle Gentles shot from the point, Mascherin pounced on the rebound into the wide open cage. Greg Meireles earned the secondary assist on Mascherin’s sixth point of the campaign.

After scoring a shorthanded marker in the first period, the Rangers registered a power play marker in the second, as Giovanni Vallati’s first of the season gave Kitchener a 4-0 lead from Eric Guest – in his first game of the season – and Rickard Hugg at 4:32.

That fourth goal chased Timpano from the Erie crease, replacing him with Oberoi. It also rounded out second period scoring, with the Rangers taking over the shot clock 21-15 including 13-5 in the middle frame.

Dumont-Bouchard made it through 50:08 of scoreless hockey before he was made to wait another day for his first career Ontario Hockey League shutout, as Fellows spoiled the bid with just 9:52 left to play in the game, unassisted, to make it a 4-1 game.

But the Otters weren’t done there, as Maksimovich cut the lead in half to make it 4-2 Kitchener at 13:07, from Jack Duff and Ivan Lodnia.

The anxiety reached an uncomfortable level in the reds, golds and blues of The Aud just 41 seconds later, as Joseph Mack’s first career OHL goal cut the Rangers lead to 4-3 at 13:48, from Christian Girhiny and Fellows.

Garreffa, however, arrived to save the day as the explosive fan favourite sniped for the third straight game, notching the insurance marker to secure the Rangers’ 5-3 victory, assisted by Adam Liška.

Each team found themselves with three power play opportunities on the night; the Rangers going 1-for-3 with the man advantage, the Otters held scoreless.

Bunnaman (flu), Guest (upper body) and Cole Carter (flu) all returned to the lineup for the Rangers on Friday night.

Stanley, Mascherin, and Carter each wore an “A” and skated as alternates to Rangers’ captain Bunnaman.

The Rangers are back in action tomorrow afternoon, Saturday, October 7th at 4pm when they take on Highway 7 rival, the Guelph Storm, for the first time this season. They close out the long weekend on Monday afternoon when they host the Owen Sound Attack for a 2pm Thanksgiving matinee at The Aud.