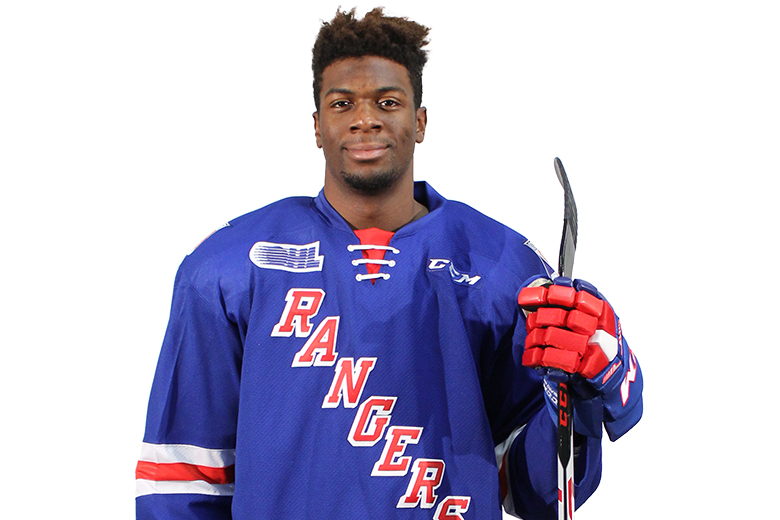 For years, Givani Smith was a thorn in the side of the Kitchener Rangers as a member of the Guelph Storm.

On Sunday afternoon, he finally returned the favour.

Smith factored into three of four Rangers’ goals as the Blueshirts (30-14-2-0) defeated their Midwest division rivals, the Guelph Storm (22-18-1-3), 4-2 in front of 7,194 fans at the Kitchener Memorial Auditorium on Sunday afternoon.

After spending parts of four seasons and over 200 games with the Storm, he faced off against them for the first time since being acquired by the Rangers at last week’s trade deadline. He picked up an assist in the first period, then followed that up with a goal in the second period and an assist in the third to cap off a three-point effort against his former club.

Adam Liška, Connor Bunnaman and Eric Guest (shorthanded) were the other goal scorers for the Rangers, who upped their win streak to three games, and in turn, snapped a three-game win streak by the Storm.

Mario Culina (7-5-2-0) won his fourth straight game as a member of the Rangers, today making 28 saves. After putting up back-to-back shutouts in his last two games, he rode a shutout streak of 155:43 before he was bested with 4:45 to play in the second period on Sunday.

Liška opened the game’s scoring at 9:14 of the first period. Michael Vukojevic earned his first career OHL point with the primary assist, while Smith also earned a helper against his former squad.

It was the lone goal of the opening frame, which saw the shots deadlocked at 12-12.

Smith picked up his second point of the afternoon with his 12th goal of the season, putting the Rangers up 2-0 from Joseph Garreffa and Kole Sherwood at 6:26 of the second period.

In the final five minutes of the middle frame the Storm managed to get on the board, as Alexey Toropchenko cut the Kitchener lead to 2-1, assisted by Ryan Merkley, at 15:15.

Just under two minutes later the Blueshirts restored their two-goal lead as Bunnaman tallied his 18th of the season, unassisted, to make it a 3-1 game at 17:12.

Shots on goal through 40 minutes favoured the Rangers, 27-20.

Isaac Ratcliffe once again brought the Storm to within one with his 22nd of the season at 11:22 of the third period, from Cam Hillis, to make it a 3-2 game.

With the Rangers shorthanded, Smith again left his mark as he broke in alone into the offensive zone. He was stopped by Popovich but Guest gobbled up the rebound, solidifying the 4-2 win for the home side at 14:04.

The Rangers were 0-for-5 on the power play, while the Storm were 0-for-3 with the man advantage.

The Rangers are back in action on Tuesday when they travel to Budweiser Gardens to take on the London Knights on January 23 at 7pm. Their next home game is Friday, January 26 when they host Mason Kohn and the Saginaw Spirit at 7:30pm.