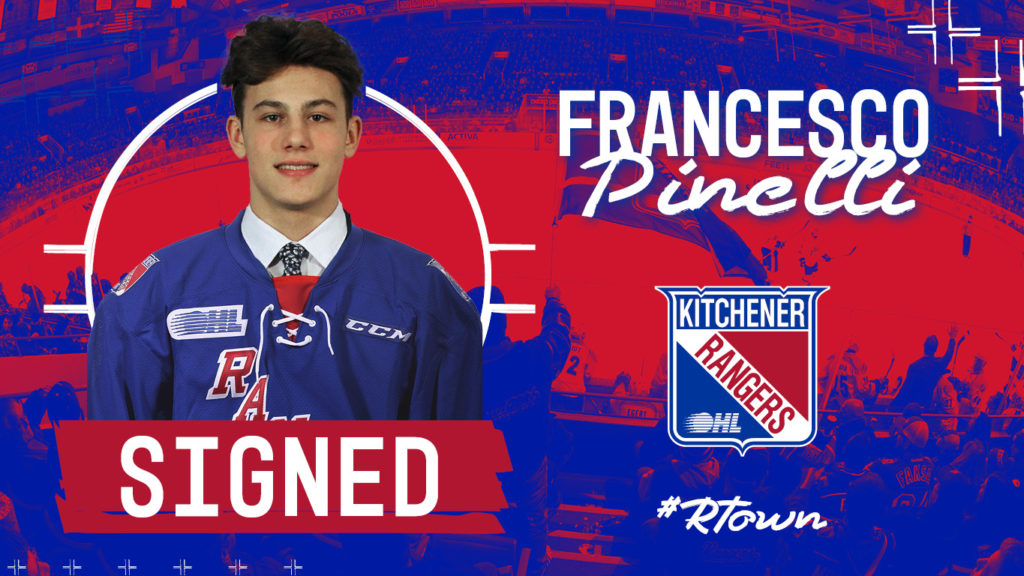 The Kitchener Rangers announced today that forward Francesco Pinelli has committed to an Ontario Hockey League standard player agreement with the club.

The 16-year-old, was the first round, 13th overall pick by the Rangers in the 2019 OHL Priority Selection. The Stoney Creek, ON native was a member of the Toronto Red Wings during the 2018-19 season where he registered 49 goals and 65 assists for 114 points in 71 games played.

“It feels very good to be a Kitchener Ranger,” said Pinelli as he stopped at the Rangers office with his parents to meet with General Manager Mike McKenzie and Senior Advisor, Scout Murray Hiebert.

“Just to sign and know that I’m in such a great organization now with great history behind it.”

Most recently, Pinelli recorded two goals as a member of Team Red at Hockey Canada’s U17 Summer Development Camp.

He also notched seven goals and 14 points in seven games at the OHL Cup in March. Pinelli tallied a goal and two assists in a 6-5 overtime Championship Final loss to the Don Mills Flyers. He was also one of the six players named to the 2019 Gatorade OHL Cup All-Star Team, a selection of the annual showcase’s top performers as chosen by OHL Central Scouting.

“It’s been very exciting,” he said of his busy off-season, adding, “I’m just trying to stay focused and composed throughout this journey. Just signing was great and going out to Calgary (for U17 development camp) was awesome too.”

As the captain of his minor midget team this past season, Pinelli was confident in saying that Rangers fans should expect to see identical leadership on and off the ice plus “a hard-working player that likes to be physical and pass the puck.”

Rangers General Manager Mike McKenzie conveyed the team’s excitement to have the chance to pick Pinelli in the first round at this season’s OHL Priority Selection.

“He is a fast skater who has the ability to beat defenders in numerous ways and make plays at a very high pace. He is going to be a great asset to our team.”