From Cambridge to the Consol Energy Centre, now is only the beginning for Connor Hall 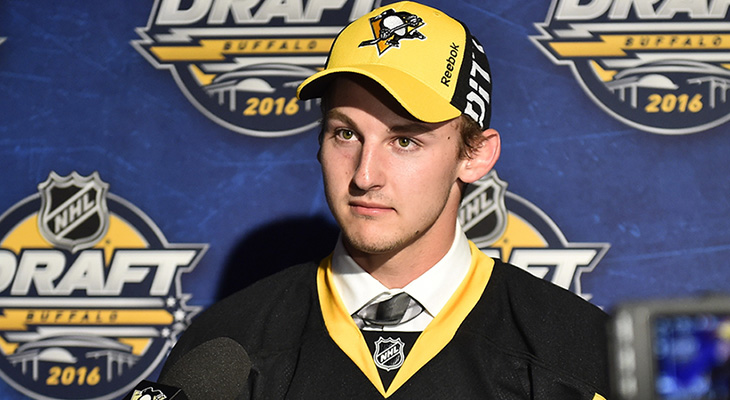 Imagine cheering on your favourite team as they win one of the most coveted trophies in all of sports. Then imagine being drafted into that same organization you’ve idolized for years, just 13 days later.

You think that’s wild? Imagine, four days after that, coming face to face with your favourite player, now a two-time Stanley Cup champion, as he welcomes you into one of the most exclusive of clubs – to which you now both belong.

Sounds like a whirlwind. Or something made purely, and only, of fantasy.

But that was the month of June for Connor Hall.

Hall has long been a fan of the Pittsburgh Penguins and, although he’s a defenceman, calls Pens captain and centre Sidney Crosby his favourite player. So when the NHL Draft unfolded the way it did and Hall became one of the newest members of the Penguins family, he admits it was quite a lot to absorb.

“There were definitely a lot of different feelings leading up to the Draft, not to mention while it’s going on, and then after you hear your name called,” Hall noted. “It’s pretty nerve wracking.”

He didn’t receive an invite to the NHL Combine, but frankly, playing just ten games in the entire first half of the season would be a pretty good explanation as to why. But he managed to make the most of the little bit of exposure he had to show himself off, garnering attention from multiple teams..

He spoke with both Pittsburgh and the St. Louis Blues prior to the Draft, but still wasn’t sure which team would decide to commit to him – or if it would be a whole other team altogether.

“You try to determine what team might actually be the one to take you, and where different teams have you rated among all the other eligible players.”

“You’re looking around at the guys that are still waiting to hear their name called, and noticing some that might be better than you. You get to the edge of your seat and get a little antsy. But you just try to remind yourself that you gotta be patient and know that eventually your name will be called.”

The wait would grow a few moments longer though, as the New Jersey Devils were poised to select 77th overall in the 3rd round, but a trade was announced. The Devils opted to part ways with the 77th pick in exchange for winger Beau Bennett, meaning it was the Pens who were officially on the clock.

Hall said that in that moment, he had a gut feeling that his would be the next name called.

“100%, as soon as I realized Pittsburgh was the other team involved in the trade, I just had a feeling,” Hall said assuredly. “I was starting to dip down a little lower than I thought I might, but it’s hard to explain. I just kinda knew it was about to happen for me.”

“It’s a pretty special feeling to know that a team saw enough value in you that they didn’t want to risk you not being there by the time it comes for them to pick. They made sure they got me, and I couldn’t be happier.”

Hall didn’t have long to allow the whole experience sink in, as he was on his way to Penguins’ Development Camp a mere four days later.

“It’s amazing to see what goes on behind the scenes of an NHL organization once you become a part of one,” Hall amazed. “Seeing guys face to face like Mario Lemieux, Bill Guerin, Mark Recchi; men that have had huge impacts on teams during their time in the league. It’s surreal.

“Then, not to mention, meeting superstars like Sidney Crosby and Evgeni Malkin, it’s just crazy. Overwhelming, really. Looking at their habits and their everyday routines is something I definitely did my best to soak up.”

And soak up anything he could is what he did. Hall tried to be as much of a sponge as he could be; he watched, listened and learned. One of the biggest takeaways for him throughout the camp wasn’t a specific drill per se, as much as it was an adaptation to a whole new way of thinking.

“The speed and the intensity are things you see escalated at that level, for sure. But a valuable thing I took away from camp was just realizing that every day is a working day, even if you’re just practicing and not playing in a game. That really hit home for me, and I know it’ll help me improve as a player.”

Now that he’s finally had some time to unwind after his life-changing month of June, he’s had the chance to realize just how amazing the whole experience has been not only for himself, but for his drafted teammates Adam Mascherin and Connor Bunnaman, as well.

“I talked to both of them prior to the Draft. To see Mash [Mascherin] go really early at 38th overall was a really special thing. It’s definitely exciting to see one of your teammates go that high.

“When Bunns [Bunnaman] was chosen, I was actually backstage watching it on TV. It was pretty cool to see all of us go in the first four rounds, and really special – I think – for the organization.”

Of course, any fan of the NHL’s Eastern Conference knows the intense rivalry that is the Penguins and the Philadelphia Flyers – the team by which Bunnaman was selected. The irony wasn’t lost on the two when realizing they could go from close teammates in the OHL to heated competitors in the pro’s.

“We joked about it a little bit saying hopefully someday we’re both in those organizations and we can play against each other. That would be pretty awesome,” laughed Hall. “But right now, I know we’re both focusing on how we can work together and make this season with the Rangers a successful one.”

Hall hopes he can have a direct impact on making that happen, not only by his play on the ice, but also by sharing what he’s learned away from the rink over the last year with the team’s younger players.

“Lots of advice was given to me by my teammates and coaches, so I just hope I can do the same for the younger guys,” he said. “I’m gonna do the best I can to be a leader and a mentor and help them out, just like was done for me.”