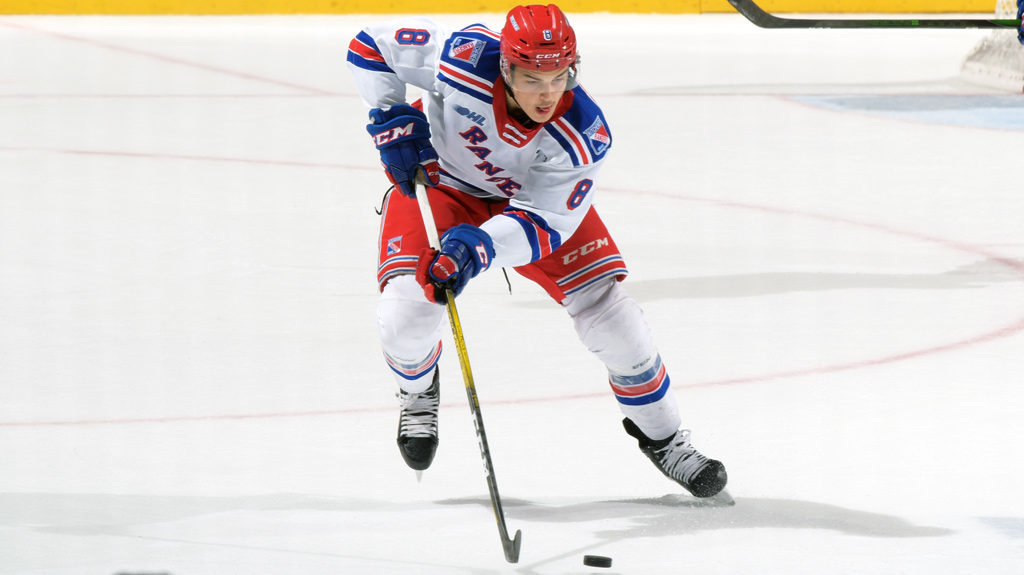 As the Rangers skated off the ice at The Aud after a second consecutive loss in early March, defenceman Arber Xhekaj held his head high.

Sure, the loss was disappointing. But he had finally reached a level of confidence that had been a work in progress for his entire hockey career.

“I thought I played my best game that night against Barrie,” Xhekaj recalled. “I felt comfortable with everything I was doing, all my moves were working out on the ice, and I was delivering big hits.”

After not having his name called during the 2017 OHL Priority Selection, Xhekaj’s career path went very much the same way as teammate Jonathan Yantsis’.

Arber spent a season with the St. Catharines Falcons of the GOJHL and ended up signing an OHL Standard Player Agreement with the Rangers as a free agent in August 2018. He was invited to Training Camp and went on to play 59 games that season, as he became acclimated to some of the challenges of the league.

“For free agents, you’re starting from scratch a lot later,” Rangers general manager Mike McKenzie explained. “It’s just different because, when we draft players at 16 years of age, they go through our spring camp, seminars, and team communications. At the end of the day though, if a player performs as well as he did this season, he’s going to get out on the ice.”

By the time Christmas rolled around this season, Xhekaj was jumping over the boards frequently and in all situations.

“Mike gave me the freedom to do what I do best out on the ice, so it felt like there was less weight on my shoulders. It was easier to play,” Xhekaj said, adding, “I pushed everything else aside and just played – and that helped.”

An added benefit was the arrival of veteran defenceman, Holden Wale, who came into the fold after a trade with the SOO Greyhounds just before the deadline. “I really noticed his daily work ethic and how hard he competes,” he said. Not that Xhekaj needed any more motivation to hold himself accountable. He’s always been relentless about not even wasting an off-day to try and get better.

“I realized from an early age that I would have to work harder to earn everything that’s come my way,” he said. “I like to tell myself, do something – anything – to get better. You can even do just one thing a day as long as it contributes to achieving a goal you might have.”

Among the accomplishments this season was setting career-highs in goals, assists, and points while leading the team in penalty minutes (with 88). Xhekaj also finished second in plus/minus (+26). That was all done in just 51 games.

“The support the Rangers fans gave me throughout the season really helped. They seemed to like me showing my toughness, so I liked to deliver,” he said.

McKenzie also admitted that things “just sky-rocketed” for Xhekaj on his way to being named this year’s Les Bradley Award-winner as the team’s Most Improved Player. So much so, he’s now considered one of the toughest players in the league. “He didn’t just become better overnight as a player, but his attributes came out when he started finding his confidence,” McKenzie said.

Some of the plays he made this season that took a lot of hockey sense provided some of the most eye-popping moments. NHL teams are even taking notice.

“He had a good enough season where … NHL teams are calling and asking about him. There’s a chance he could get drafted because I know he’s on the radar for a lot of teams,” McKenzie said.

With Xhekaj heading into his third season with the Rangers, his drastic improvement has made the coaching staff’s job a lot easier by having him cemented in a top-four defensive pairing.

“He’ll take an even bigger role next year as a 19-year-old we expect that he’ll rise to that challenge,” he said.

As always, Xhekaj is ready to face the challenge. “Whatever happens, I just have to stay humble and keep doing the things that have got me to the position I’m in today.”