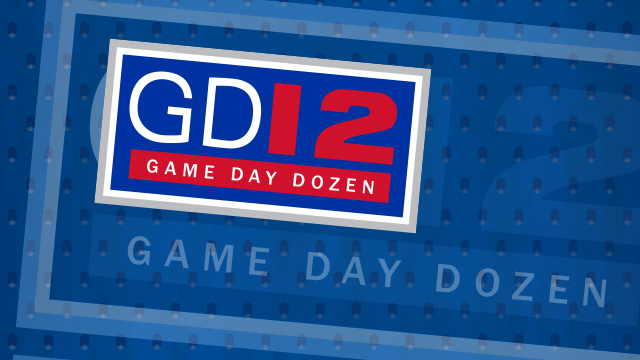 1) Today marks the second and final time the Kitchener Rangers and North Bay Battalion will meet this season. The Rangers picked up a 4-2 win in North Bay on October 1st for their first win of the season.

2) The Battalion are tied with the Owen Sound Attack for the worst road record to start the OHL season (1-3-0-1). North Bay has scored just nine goals away from home, second only to the Guelph Storm (8). The Rangers are 4-0-2-0 at the Aud.

4) The Rangers have opened the scoring in 12 of 13 games to start the season.

5) Rangers left winger Brandon Robinson is riding a six-game point streak to begin his season after registering two assists in the Rangers 7-2 win last night over the Petes. Last night’s game was the first game of the season in which Robinson did not score a goal.

6) Rangers centre Ryan MacInnis had the first four-goal performance of his OHL career last night (which included three power play goals). It was the first time the four-goal feat had been accomplished by a Rangers player since Tyler Randell in a playoff game versus the Plymouth Whalers on April 17, 2012. The last time it was done in the regular season was by Jeremy Morin in a 4-2 win over the Sault Ste. Marie Greyhounds on October 12, 2009.

9) Rangers defenceman Brian Brosnan continues to lead the OHL in plus/minus with a plus-18. Fellow defenceman Dylan Di Perna holds the league’s second highest mark at plus-17.

11) MacInnis sits fourth in points in the OHL with 20, and is ranked third in the league in goals with 10. MacInnis (4) is tied with Frontenacs’ Spencer Watson for the most game-winning goals scored this season.

12) The Rangers boast the best power play in the OHL coming into today’s game, converting at 29.3%.