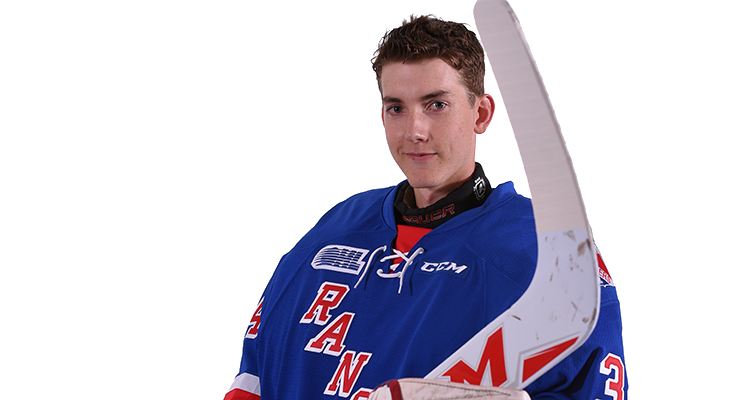 If there was ever any worry that the Highway 7 Rivalry was losing its edge, all doubt has been cast aside during the past two meetings between the Kitchener Rangers and the Guelph Storm.

Luke Richardson (2-0-0-0) earned his second win of the season, remaining perfect through 40-plus minutes in goal and ending the night with 38 saves on 40 shots. Joseph Garreffa dazzled the many Rangers fans in attendance with two third period goals and a three-point night to help guide Kitchener to victory.

Garreffa put up a three-point effort in the Rangers last game on Sunday versus the Erie Otters (3A), and now has two goals and four assists for six points in his last two games. In games that he’s etched his name on the scoresheet, he has three consecutive three point games, and three or more points in four of his last nine games.

Fellow defenceman Dylan Di Perna notched a pair of assists, while Darby Llewellyn was the other goal scorer for the Blueshirts.

Llewellyn opened the game’s scoring as he banked in a Jake Henderson rebound to give the Rangers a 1-0 lead at 5:29 of the first period. Elijah Roberts picked up the second assist on the game’s opening goal.

Mascherin earned his 26th goal of the season with a great individual effort, breaking into the offensive zone then banking in his own rebound with a diving dig. His 60th point of the season put the Rangers up 2-0 at 13:33 of the first, with Garreffa and Hora picking up the helpers.

After the first period of play the Rangers led the Storm 19-12 in shots on goal.

Near the midway point of the second period Hora tallied his first of the season – the eventual game winner – widening the gap to 3-0 Kitchener with an unassisted goal at 8:24. It was the lone goal of the middle frame, which saw the Storm outshoot the Blueshirts 13-11 for a two-period total of 30-25 in favour of the visitors.

Garreffa wasted little time after the puck dropped in the third period of play, registering his 10th of the season after breaking into the offensive zone and wrapping around the Guelph goal just 16 seconds into the period to give the Rangers a 4-0 lead from Di Perna.

Moments later the Storm got on the board, as Barret Kirwin cut the Rangers lead to 4-1 from Noah Carroll and Liam Stevens at the 2:24 mark of the third.

Garreffa tallied his second goal and third point of the night with the Rangers on a 4-on-3 man advantage to make it a 5-2 Kitchener game, from Mascherin and Di Perna, at 12:07 of the third to round out the game’s scoring.

Shots on goal in the chippy third period were 15-9 Guelph for a game total of 40-39 for the home side.

Kitchener would finish 1-for-4 on the power play, while Guelph was 0-for-5 on the man advantage.

The Rangers return to the Aud Friday, January 6th when they host the Sault Ste. Marie Greyhounds at 7:30pm.