12 THINGS TO KNOW BEFORE TONIGHT’S GAME

Compiled by: Alyscia Warner, Communications Manager
1) Today marks the second and final meeting of the season between the Sudbury Wolves and Kitchener Rangers. The Wolves claimed the first meeting in Sudbury, 4-2, back on November 26, 2017.

2) The Rangers are coming off a season-long five game road trip, which saw them go 3-2-0-0. They won the first two games, followed by back-to-back losses before rebounding with a 3-2 win over the 67’s in Ottawa on Family Day.

3) The Wolves are playing their second game of a season-long span of seven straight games away from home. They lost 3-2 in overtime to the North Bay Battalion on Wednesday.

5) Tonight marks the first time defenceman and former Ranger Doug Blaisdell returns to The Aud since being acquired by the Wolves earlier this season. As a Ranger, he sits 9th all-time in regular season games played by a defenceman with 232.

11) Overall, the Rangers boast the 3rd best PK in the OHL, while the Wolves are 18th and 19th on the PP and PK, respectively. 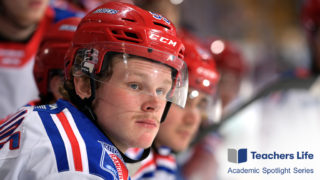 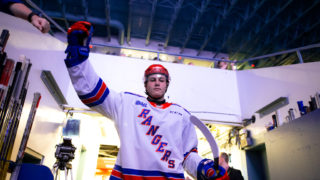