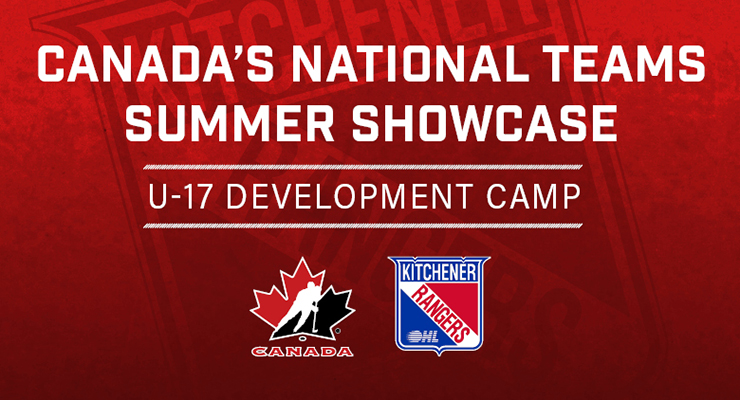 Rangers defenceman and 2016 first round selection Giovanni Vallati and Team Black claimed a 5-1 win over Team Red in the championship game of Team Canada’s U-17 Development Camp which wrapped up on Monday.

111 players – including four with Rangers ties – were invited to participate at Canada’s National Teams Summer Showcase U-17 Development Camp from July 29 – August 1 in Calgary, Alberta.

The players were divided into six squads, including Red, White, Blue, Black, Gold and Green.

Along with Vallati skating with Team Black, Riley Damiani and Eric Guest were teammates on Team Green. Defenceman Merrick Rippon was a member of Team Red.

Game action began on Friday with a 3-1 victory for Team Gold over Damiani, Guest and Team Green.

After a scoreless first period, Team Gold would take a 3-0 second period lead and hold on for the 3-1 win. Despite the loss, Team Green outshot Team Gold 24-17.

In the second game of the day, Rippon and Team Red claimed a 4-2 win over Team White.

The game remained scoreless until just over three minutes into the final period when Team Red would take a 3-0 lead in a span of just under five and a half minutes. Team White would get on the board to cut the lead to 3-1, but the teams once again exchanged goals in the second half of the period for the 4-2 final. Final shots were 28-25 Red.

On Saturday, Vallati and Team Black won its opening game of the weekend with a 4-1 come-from-behind victory over Team Gold.

After surrendering the game’s opening goal on the power play just over four minutes into the second period, Team Black came back to score four straight goals and claim the win.

Vallati picked up a pair of assists in the win, including the primary assist on the eventual game winner at 15:26 of the second period (PP), and on the final goal of the game at 15:52 of the third period. Team Black outshot Team Gold 32-24.

The final game of the day saw Team Blue skate away with a 3-2 shootout win over Team White.

Sunday’s action kicked off with a meeting between Vallati and Team Black versus Damiani, Guest and Team Green. Team Black claimed the win, 3-2, in overtime.

Damiani opened the game’s scoring just 10 seconds into the opening period to give Team Green a 1-0 lead. Team Green would register another with just over five minutes to play in the frame to go up 2-0 on the power play, but Team Black would make it a one-goal game, 2-1, before the period ended.

With 2:01 remaining in the middle frame the game was tied as Team Black scored on the power play, and the third period would solve nothing. Team Black needed just 1:14 to end it in overtime, outshooting Team Green 3-0 in extra time. Final shots were 37-26 Green.

Rippon and Team Red outlasted Team Blue 5-4 to claim the final game of the day on Sunday.

After the teams rallied back and forth with two first-period goals a piece, they were again tied 3-3 just under five minutes into the second period. Team Blue took its first lead, 4-3, just under the midway point of the game, but a pair of third period goals by Team Red would allow them to regain the lead and give them the evenutal win.

On Monday, Damiani, Guest and Team Green would explode offensively for eight goals as they claimed an 8-4 win over Team White in their final game of camp.

Damiani scored twice and Guest also registered a two-point game – a goal and an assist – in the high scoring affair. Guest opened the game’s scoring, giving Team Green the 1-0 lead at 5:29 of the first period. Just over a minute and a half later it was Damiani who gave Green a 2-0 lead with his first of the game at 7:07, then followed that up with his second at 9:54 to put their squad up 3-0.

After a 2-1 Team Gold win over Team Blue, the stage was set for the camp final between Team Black and Team Red, in which Black came away with the 5-1 win.

Team Black took a 1-0 lead into the first intermission, then Vallati picked up the primary assist on the evenutal game-winning power play goal at 2:03 of the second period as the team led 3-0 after 40 minutes. Black would lead 5-0 at 13:12 of the third period before Team Red spoiled the shutout bid and got on the board with a power play goal with 3:20 remaining in the game. Final shots were 25-23 in favour of Team Black.

The U-17 Development Camp gave players the opportunity to showcase themselves for the chance to partake in the 2016 World U-17 Hockey Challenge from October 30 – November 5 in Sault Ste. Marie.