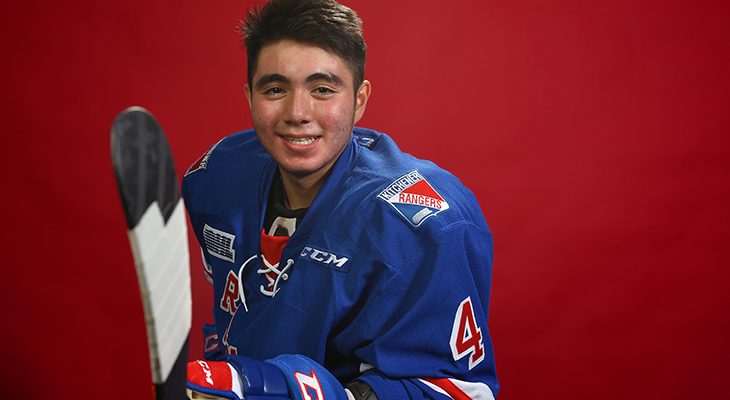 The penalties, the chirps, and the feistiness all had the likeness of a first round playoff matchup. The only thing missing on Friday night was the closeness of the first three meetings between the Kitchener Rangers and Sault Ste. Marie Greyhounds.

The two teams may indeed potentially meet in the opening round of the Ontario Hockey League playoffs if the Soo retain their hold on second place in the Western Conference standings, and the Rangers fall to seventh. With the Greyhounds win and a Windsor Spitfires loss to the Sarnia Sting, the Soo (94 points) maintain an eight-point lead over the Spits (86), each with four games left to play.

The Rangers (72) remain in sixth spot, while the seventh-place Flint Firebirds (70) were idle. The two teams meet tomorrow night in yet another game with huge implications on playoff positioning.

The win for the Soo extended their unbeaten in regulation streak to eight games (7-0-1-0), as it was all Greyhounds over the course of the night after taking a 3-0 lead through the first period of play, and 5-0 after two.

Luke Richardson (9-5-0-0) started the night in goal for the Rangers but wouldn’t finish, surrendering five goals on 18 shots through the first 40 minutes of play. Luke Opilka returned to the blue paint for the Rangers, allowing just one goal while making 10 saves in the third period.

Matthew Villalta (24-2-0-0) picked up the win and earned it, turning aside 40 of 41 Rangers’ shots he faced with the lone goal he allowed ruining his shutout bid with just 3:02 left to play in regulation.

Bobby MacIntyre opened the scoring to give the Greyhounds a 1-0 lead on the power play at 9:56 of the first period, scoring from one knee with the assists to Zachary Senyshyn and Barret Hayton.

The Rangers then took their first man advantage of the game at 13:32 after a tripping penalty to Tim Gettinger, but it was the Greyhounds who capitalized as MacIntyre sprung Waterloo native Boris Katchouk for his 31st goal of the season. MacIntyre picked up the lone assist on the shorthanded goal, which came at 14:57.

Before the period was out the Hounds would strike again, as Conor Timmin’s seventh of the season gave the Soo a 3-0 lead, from Hayton and MacIntyre with just 1:18 left on the clock at 18:42.

Shots on goal in the first period of play were 13-8 in favour of Kitchener.

The Greyhounds came close to taking a 4-0 lead with 7:55 to play in the second period, but a pair of incredible sprawling pad saves by Richardson that should surely be seen in the next edition of the OHL’s Janes Saves of the Week shut the door on the offensive opportunity.

The Soo would eventually find that fourth goal however, as Speers fed Katchouk who buried his second of the game with a one-timer from the slot, extending the Greyhounds lead to 4-0 at 14:27 of the second period. Gustav Bouramman picked up the secondary assist.

With 2:13 left on the clock in the middle frame, Gettinger made it 5-0 for the hosts. Bouramman and Timmins picked up the assists to round out second period scoring.

Opilka made his return to the Rangers crease to start the third period in favour of Richardson after missing the previous nine games due to injury.

Mac Hallowell tallied his third goal of the season to make it a 6-0 game, assisted by Hayton, at 4:22 of the third period.

Joseph Garreffa would spoil the shutout bid of Villalta by burying an Adam Mascherin rebound at the side of the goal to make it a 6-1 game at 16:58, rounding out the game’s scoring.

Kitchener was 0-for-3 on the power play, while the Soo was 1-for-3 with the man advantage.

The Rangers get a chance to right the ship tomorrow night, Saturday, March 11th, when they take on the Flint Firebirds at 7pm at the Dort Federal Credit Union Event Center.

They make their final visit of the season to the Sleeman Centre to take on the Guelph Storm on Tuesday, March 14th at 7pm before finally returning home for their final home game of the regular season – ‘Fan Appreciation Night’ – on Friday, March 17th at 7:30pm vs. the Erie Otters.

Tickets to the first two Kitchener Rangers’ home playoff games (Games ‘A’ & ‘B’) of Round One will go on sale Friday, March 17th at 10am. More information on playoff tickets can be found here.

Playoff opponent, game dates, and times are yet to be determined and will be announced once confirmed. Round One will begin no sooner than March 23rd and end no later than April 4th.