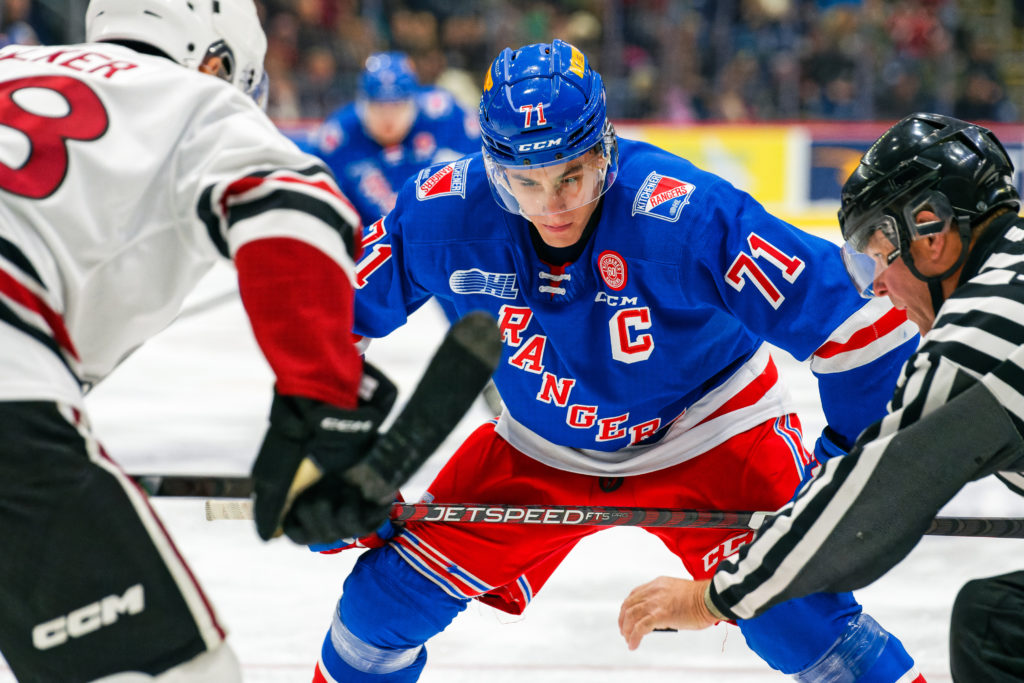 Guelph, Ont. – The Highway-Seven rivalry will mean even more this week as the first game of a home-and-home series opens Saturday night in Guelph before facing the Storm at home in Kitchener on Tuesday.

Kitchener Down Manpower:
The Rangers enter Friday’s game still missing four key players. Kitchener Rangers goaltender Jackson Parsons and Forward Mitchell Martin will undergo surgeries to repair injuries. Parsons will miss the remainder of the 2022-23 OHL season. Martin will return to the Rangers’ lineup later this season in 2023. Filip Mesar, a first-round pick to the Montreal Canadiens, is out with an upper body injury. Ty Hollett is serving game three of a three game suspension. In their absence, the Rangers have recalled Kitchener native and defenceman Blair Scott, who is currently playing Junior B with the Ayr Centennials in the Greater Ontario Junior Hockey League (GOJHL).

Head-to-head:
Kitchener is 2-1-0-0 against Guelph this season, winning once on the road and again at The Aud. Kitchener is now 4-6-0-0 over their last 10 games after dropping their game to Windsor Friday night. Guelph was also in action Friday night coming back from a 2-1 deficit to win 4-2 against the Erie Otters in Guelph. They now have improved to 5-4-0-1 in their last 10 games.

Including the games played this season, Kitchener and Guelph have gone head-to-head 37 times. Over that span Kitchener owns an impressive 22-13-2-0 and a 11-6-2-0 record at the Sleeman Centre in Guelph. Their most impressive run was taking all four road games from Guelph in the 2019-20 regular season going 4-0-0-0.

Kitchener has only needed extra time once this season which came against the Guelph Storm as a vicotry. Guelph on the other hand has gone to the extra frame 7 times in which they have a 1-2-3-1 for 11 points. (Win, Lose, Shootout Win, Shootout Loss)

Scouting the Rangers:
Rangers’ leading scorer and captain Francesco Pinelli (Los Angeles Kings) returns to the lineup after serving a three-game suspension after an incident on Nov. 20 against Windsor. Pinelli has three goals and three assists on the power-play this season. He has totaled 22 points (13G, 9A) in 19 games so far this season.

Carson Rehkopf scored his 11th goal of the season Friday night making him the second highest goal scorer on the Ranger roster.

Scouting the Storm:
Guelph is led by Matthew Poitras and Danny Zhilkin who have 26 and 25 points this season respectively. Poitras leads the team with 26 points (6G, 20A) and Zhilkin leads the Storm in goals with 11.

Max Namestnikov has been on a tear since joining Guelph in a trade from the Sarnia Sting. In 18 games with Sarnia, Namestnikov recorded seven points (4G, 3A), but is almost averaging two points per game in six games with Guelph so far. Namestnikov has recorded 11 points scoring six goals and adding five assists.

Jake Murray has the points-lead amongst Guelph defenders this season and was acquired from Kingston after only playing four games for the Frontenacs. In 21 games with Guelph, Murray has 15 points (2G, 13A) and 17 points (2G, 15A) in 25 games overall this season.

Cameron Allen is listed as an ‘A’ ranked prospect and Niko Minkkinen and Valentin Zhugin are both ranked as ‘C’ prospects on the NHL Central Scouting Preliminary Players to watch.

Broadcast Coverage:
Saturday night’s contest in Guelph will be televised live throughout the Kitchener and Waterloo Region on Rogers TV, cable channel 20. The game will also be televised live across the province of Ontario on the Super Sports Pak on channel 468 for cable subscribers and will be streamed live online on OHL Live on CHL TV. Additionally, fans can listen to the game on the radio on CityNews 570 AM CKGL. Mike Farwell (play-by-play) and Chris Pope (colour commentary) will call the game on the radio. For more information on Kitchener Rangers broadcast coverage, click here.