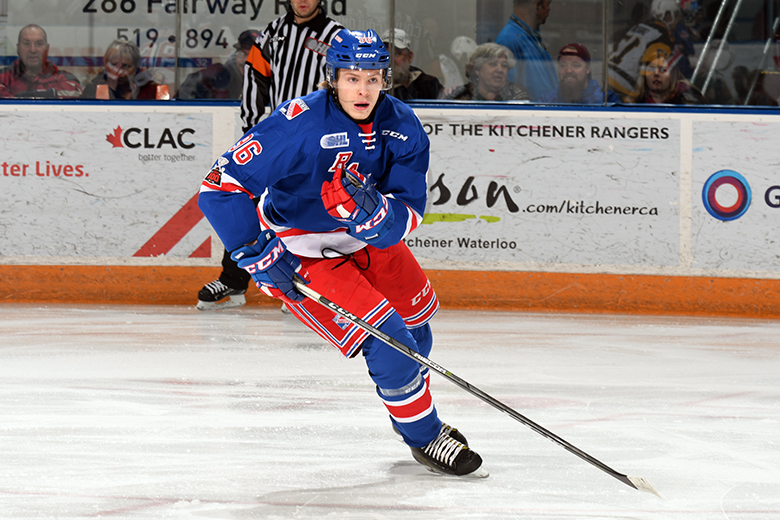 If you ask us, Nick McHugh and Rickard Hugg picked pretty good times to score their first goals of the Ontario Hockey League playoffs.

McHugh erased a 2-1 Kitchener Rangers deficit with 5:08 left to play in the third, and Hugg scored at 7:56 of overtime to give the Blueshirts a 3-2 win over the Sarnia Sting in front of 6,889 fans at The Aud on Friday night in Game 5.

The Rangers now lead the best-of-seven series, 3-2, with a chance to clinch the series in Game 6 on Sunday night, April 15 at 5pm at Progressive Auto Sales Arena.

As game-changing as were the goals by McHugh and Hugg, equally so was the play of Rangers goaltender Mario Culina.

The 20-year-old, Sault Ste. Marie native was simply extraordinary in goal; facing 15 Sarnia shots in the first period alone, followed by a barrage of 16 more in the second, 14 in the third and four more in overtime. He would make a total of 47 saves on 49 shots to earn his seventh win of the playoffs.

Along with McHugh and Hugg, the trend of depth-scoring for the Rangers rang true on their first goal of the night as well, as Jack York scored his second of the playoffs to give the Rangers the game’s opening goal in the second period.

York, from Kole Sherwood and Logan Brown at 5:24, put the Rangers up 1-0 and was the lone goal through the game’s opening 40 minutes.

But just over a minute into the third period visitors etched the scoresheet as Sean Josling tied things up, 1-1, from Jordan Ernst, at 1:35.

They would take their first lead of the night ten minutes later on a goal by Hugo Leufvenius, from Ryan McGregor and Theo Calvas, to make it 2-1 Sting at 10:37.

The Rangers weren’t able to generate many chances in an effort to tie the game until 5:08 left to play when McHugh scored his first of the playoffs, from Greg Meireles and Logan Stanley, to send the game to extra time tied 2-2.

Shots on goal through regulation were 45-29, Sting.

Connor Bunnaman and Adam Mascherin earned the assists on Hugg’s overtime winner. Shots at the final buzzer were 49-34, Sarnia.

Over the course of the evening, Kitchener Sports Association collected donations at their 50/50 kiosk locations throughout The Aud in support of the Humboldt Broncos. Tonight’s crowd gave $4,462 to the cause, and the Rangers will also be donating – on behalf of their fans – an additional $2.00 for every $1.00 raised (another $9,000), for a total of $13,462.