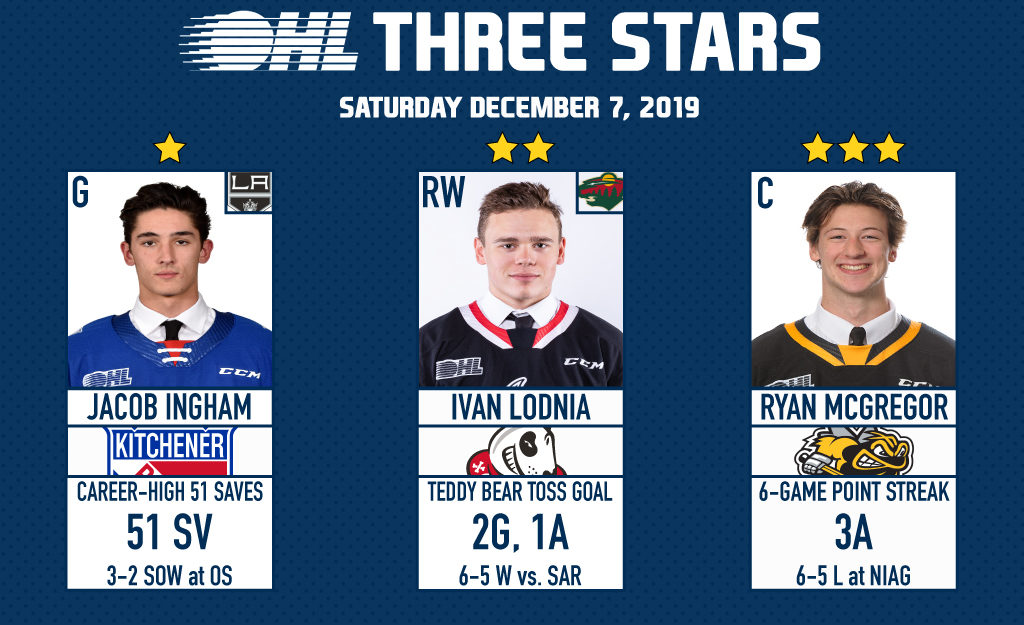 1ST STAR: JACOB INGHAM (KITCHENER RANGERS) – 51 SV
Los Angeles Kings prospect Jacob Ingham made a career-high 51 saves before stopping all three shootout opponents he faced as the Kitchener Rangers edged the Owen Sound Attack 3-2. Ingham’s big night powered the Rangers to their sixth consecutive win as the 19-year-old from Barrie, Ont. improved to 10-3-2-1 with a 3.05 goals-against average and .916 save percentage in 16 games this season. Ingham was a seventh round pick of Los Angeles in 2018. He was acquired by the Rangers this past summer after spending his first three OHL seasons with the Mississauga Steelheads.
• HIGHLIGHTS

2ND STAR: IVAN LODNIA (NIAGARA ICEDOGS) – 2G, 1A
Minnesota Wild prospect Ivan Lodnia scored Saturday’s Teddy Bear Toss goal in Niagara and went on to finish with three points as the IceDogs defeated visiting Sarnia 6-5. Lodnia scored his 14th and 15th goals of the season, giving him 31 points (15-16–31) over 19 contests. The 20-year-old from Novi, Mich. is in his fifth OHL season after previously being an OHL champion with the Erie Otters in 2017. Saturday was Lodnia’s 250th career contest as Minnesota’s third round pick in 2017 has 231 (94-137–231) career regular season points.
• HIGHLIGHTS

3RD STAR: RYAN MCGREGOR (SARNIA STING) – 3A
Overage forward Ryan McGregor picked up three assists in Sarnia’s narrow 6-5 road loss to the Niagara IceDogs on Saturday. Sarnia’s captain, the three assists match a season-high for McGregor who now has points in six straight games for 25 (8-17–25) over 18 contests this season. The 20-year-old Burlington, Ont. native missed the first month of the season with an injury but has come back strong. McGregor was a sixth round pick of the Toronto Maple Leafs in the 2017 NHL Draft before going unsigned. He was invited to attend rookie camp with the Columbus Blue Jackets in September.
• HIGHLIGHTS