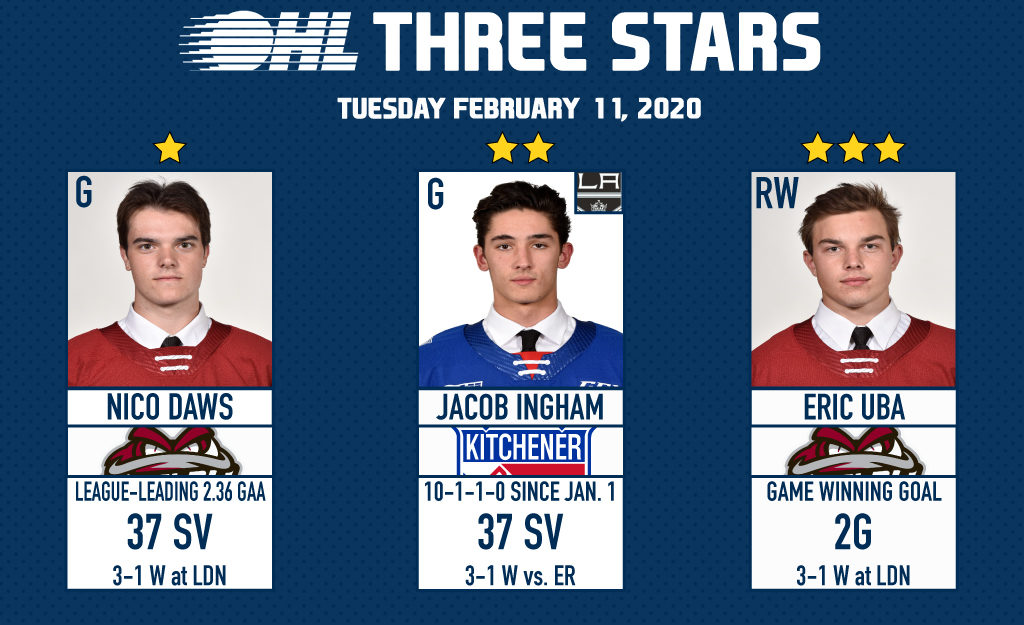 1ST STAR: NICO DAWS (GUELPH STORM) – 37 SV
Guelph Storm netminder Nico Daws stopped 37 of the 38 shots he faced in his team’s 3-1 defeat of the London Knights. The Canadian World Junior gold medalist boasts a league-leading 2.36 goals-against average and .927 save percentage, as well as a 17-6-4 record through the 29 games he’s suited up for this season. The 19-year-old product of Burlington, Ont. was a seventh round pick of the Storm in 2016 and is gearing up to hear his name called at the upcoming 2019 NHL Draft.
• HIGHLIGHTS

2ND STAR: JACOB INGHAM (KITCHENER RANGERS) – 37 SV
Los Angeles Kings prospect Jacob Ingham kicked out 37 shots as the Kitchener Rangers skated to a 3-1 win over the visiting Erie Otters. The 19-year-old from Barrie, Ont. backstopped the Rangers to their fourth straight win, improving to 26-5-4-1 with a 2.69 goals-against average and a .925 save percentage. Ingham was a seventh round pick of Los Angeles in the 2018 NHL Draft.
• HIGHLIGHTS

3RD STAR: ERIC UBA (GUELPH STORM) – 2G
Eric Uba scored the game winner and added an empty netter to push the Guelph Storm to a 3-1 victory, putting an end to the London Knights’ win streak. The 19-year-old winger connected with Cedric Ralph and Keegan Stevenson to find the back of the net at the 18:55 mark of the final frame to give the Storm their first lead of the game, then found the empty net on his own with just 13 seconds left on the clock to add insurance. The Kitchener native now owns 22 goals and 45 points through 51 games in his third OHL season, surpassing his previous season’s 42-point total. Picked up by the Flint Firebirds in the ninth round of the 2016 OHL Priority Selection, Uba was traded to the Storm last summer.
• HIGHLIGHTS