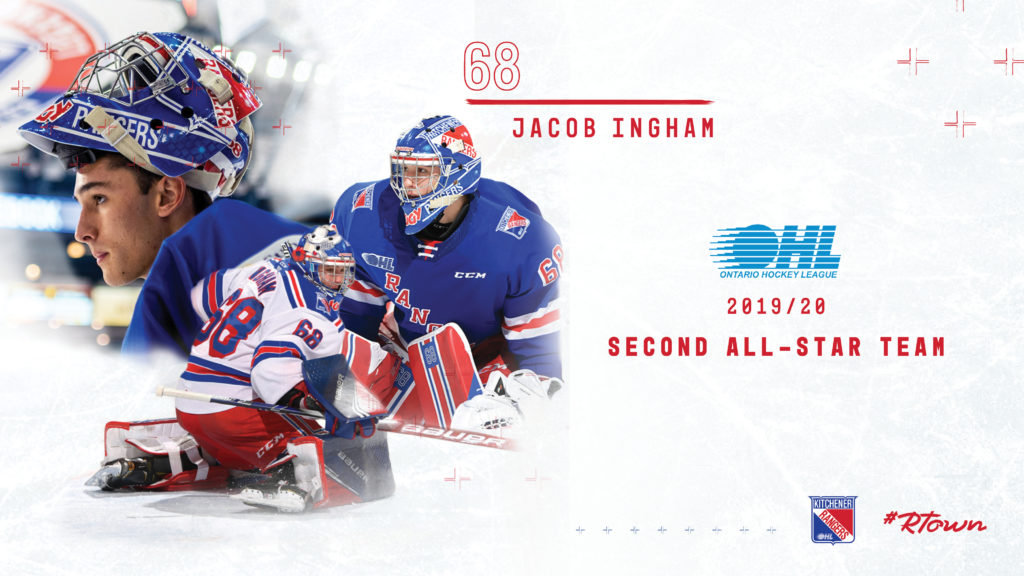 Kitchener Rangers goaltender Jacob Ingham has been named to the Ontario Hockey League’s 2019/20 Second All-Star Team. Ingham was among the First, Second and Third All-Star Team selections announced on Wednesday.

The OHL All-Star Teams were selected by the OHL’s General Managers, with voting conducted in two stages – beginning with a Conference ballot followed by a final ballot that integrated the top selections from both the Eastern and Western Conference results.

“I’m very proud to be named a 2019/20 OHL All-Star. To be recognized with so many other talented players across the league is extremely humbling,” Ingham said, having been named a First Team All-Rookie back in 2016/17.

The 19-year-old from Barrie, ON is the first Rangers player to be named an OHL All-Star since Adam Mascherin made the Third Team in 2017/18.

“The support I received from teammates, the coaching and training staff, the Rangers organization, and fans was amazing and helped me perform at my best.”

“Jacob is extremely deserving to be named an OHL All-Star. He had an outstanding season and was a key part of the team’s success,” Rangers general manager Mike McKenzie said.

“It’s great to see this acknowledgment of all his hard work on and off the ice.”

Ingham has already been announced as the 2019/20 OHL Humanitarian of the Year and OHL nominee for the CHL award.

He has also earned the Rangers’ Ted Scharf Humanitarian Award and the Jim Malleck Memorial Trophy as the club’s Most Valuable Player.